Embrace of the Vampire: Alyssa Milano at her Sexy Best


Well, first things first. "Embrace of the Vampire" (1995) has one true purpose, which it also serves extremely well. That purpose to get Alyssa Milano out of her clothes and into the arms of various others. Female others, mostly, but not entirely. Because, you know, in '90s direct-to-video thrillers, if it's two girls together, it's not nearly as serious to those who care about such things as it would be if it were a girl and a guy. I know, go figure, but that's how it worked then, and undoubtedly still does in the world of cheesy thrillers like "Embrace of the Vampire."


One purpose is to show Alyssa Milano in a lesbian seduction, wrought by upperclass photographer "Sarah," played by Charlotte Lewis. The scene is a masterpiece of its kind, starting out with Alyssa dressed in a virginal white outfit, sitting sweetly and innocently on a park bench by herself in what appears to be the early morning, just waiting to be picked up. Why Alyssa is waiting in virginal white on a park bench to be picked up early in the morning is not explained, of course - that would be so, you know, linear and so forth.


Suddenly, along comes the seductress Lewis, clad in black and holding a large phallic camera. Almost no words are exchanged, and believe me, this scene doesn't need any. Somebody knew their business when they blocked out this one. Of course, there's absolutely no need for this scene in "Embrace of the Vampire" at all, it just pops out of nowhere and leads nowhere, so you can always fast-forward through it if you find the plot absolutely gripping and don't want to be bothered with this lesbian nonsense....


Let's back up a second. In "Embrace of the Vampire," Alyssa Milano plays Charlotte (it gets a little confusing with all these Charlottes around, but bear with me), an innocent virgin (but not for long) who is having bad dreams about sex. She learns that a vampire is after her, though it's never quite clear whether she really "realizes" it or not, because she invariably is seeing visions or sleepwalking during these encounters.

The vampire is cursed and must seduce her (apparently she's the only virgin on campus, which is kind of a funny concept right there). The vampire must make her love him within three days or he will die. The only problem is, Charlotte is in love with someone else. Now, I could go on and on about how this is a fine movie with a wonderful plot, starring a fine villain (and I cannot fathom under any circumstances why Alyssa did not receive top billing). I also could expound upon the film industry's endless efforts to turn every single last book and film into a tale about non-existent creatures known as vampires. 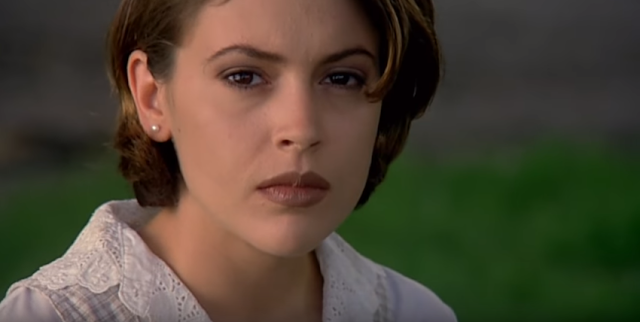 As is sometimes the case in these kinds of take-it-to-the-limit-female-exploitation flicks, the director is a woman (Anne Goursaud), which insulates "Embrace of the Vampire" from at least one line of attack as being, well, anti-woman. It was made by a woman, right? So it is empowering! It almost makes watching this sexualized thing a feminist statement! Lordy, lordy, Hallelujah! 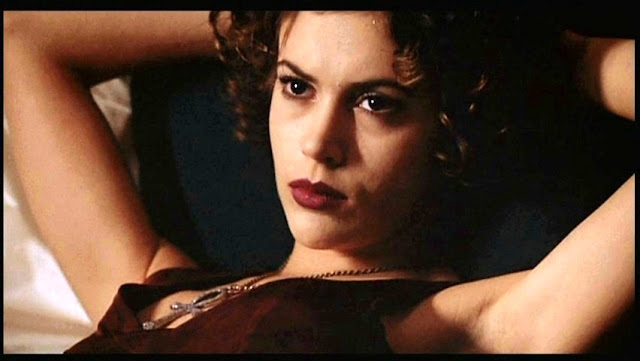 Because of the success of this project, Goursaud and Alyssa went on to do "Poison Ivy 2," which isn't nearly as titillating as "Embrace of the Vampire." (Goursaud's directing peak, incidentally, was "Another Nine & a Half Weeks," which, if you know anything about that potboiler, tells you something about her special talent right there). 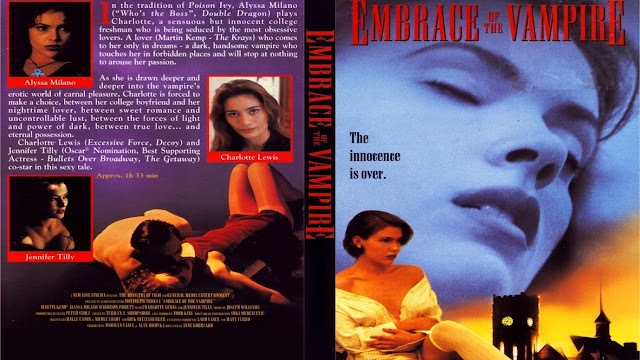 "Embrace of the Vampire" has made its backers a TON of money on video sales, and thus stands as one of the all-time most successful movies that you never heard of. How can that be?? See above about the "sole purpose," or glance at any of the accompanying pictures. These kinds of films, the ones that go so far that they fall out of the "good date movie" category because girls get jealous and don't like them (yes, that's a gross generalization), were humongous moneymakers in home video.


Thus, these types of films look like failures if you just look at what they earned on general theatrical release, which was almost required in the mid-90s. However, sometimes films like "Embrace of the Vampire" find their true life in the film kingdom's afterlife - video sales, where guys can just buy the tape or DVD without their significant other having any say about it. You'd be amazed - or at least I am - at some of the real stinkers that everyone thinks are flops, but wound up earning tidy sums from sales and rentals. "Embrace of the Vampire" is a classic in that regard. Legendary, in fact. Like a vampire. 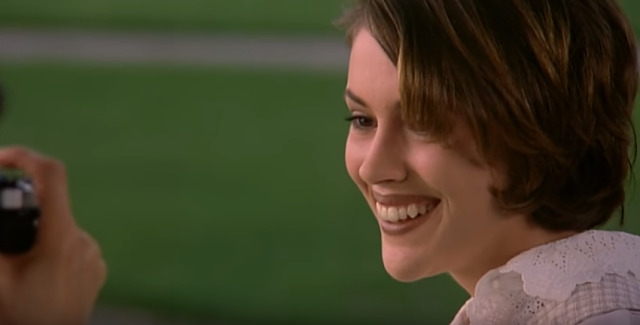 There are odd corners of the Internet where the question is endlessly debated, "what is the hottest mainstream film sex scene?" Let me tell you, the Milano/Lewis scene in "Embrace of the Vampire" receives its share of mentions in such places.


I'll be honest with you here, as always. I have a confession to make. I don't think I've ever made it all the way through "Embrace of the Vampire" in one sitting. "Embrace of the Vampire" is just not that kind of film. You watch it for certain scenes where you go, OMG did she really do that? Sitting through it in the theater must have been torturous. Watching it at home where you can fast-forward and so forth? Pure bliss. 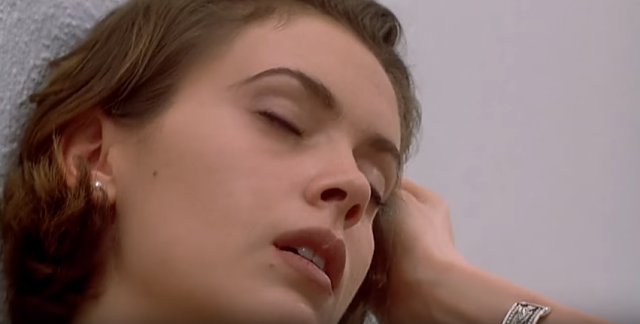 
One of the odder stories about the early days of the Internet concerns Alyssa Milano. Her mother was aghast - AGHAST - that people would post nude photos of her daughter online (I guess she wasn't as aghast that her daughter posed for those photos in the first place, but then, when the photos were taken, Alyssa got paid, but when they were posted online on others, well....). And Alyssa's little brother could find them online! Her LITTLE BROTHER! And innocent little Alyssa was being spread all over the Internet like a common... exotic dancer! Or vampirish vixen. Or aging child star at that awkward age.


So, mama spent countless hours and much time and money hunting down the offenders and blasting that filth off the web. This actually was a big deal back in the '90s, which wasn't all that long ago.


Well, a very, very, VERY quick look will tell you that mama eventually gave up, because today there are countless screen captures of her daughter's famous (topless) scene from this film on the Internet (as well as similar scenes from "Poison Ivy 2"). Maybe it was all a publicity stunt, but a very strange one for any mother to play out. I'm sure she meant well, the nice lady. 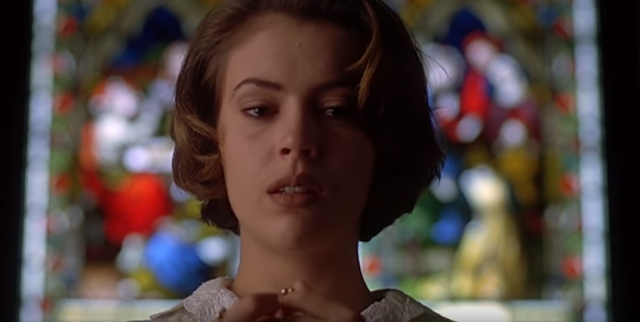 Just so you know, the plot is something about Alyssa being the object of lust for some vampire (Martin Kemp, I think he was in Spandau Ballet or something, like, whatever, good for him) who pines after her. I mean, don't they all? Didn't everyone? They do in "Embrace of the Vampire."


Does the vampire get her? Who cares! The lesbian seduction scene comes along way before the vampire does anything, and by then, you will have switched this thing off - I can practically guarantee that.


No, this is not a cinematic classic. It did not win any Academy Awards. The music is forgettable, and the acting is wooden. So what?


Alyssa Milano is so cute and adorable, isn't she? But there's more! Jennifer Tilly of all people arrives mid-way through "Embrace of the Vampire." She has the thankless task of following Alyssa Milano's big sex scenes, and you never want to do that. Not if you want to get any attention yourself, that is. But, if you want your performance to be completely overlooked because it was just a paycheck when you were young and struggling, maybe that's a good thing.


After many years of discussions about it, there finally was a 2013 remake of "Embrace of the Vampire" starring Sharon Hinnendael ("Look"). Well, we know the reason for a remake: the original "Embrace of the Vampire" made a ton of money. The remake has nothing whatsoever to do with the original beyond re-using character names and the general theme. If you like sexy vampire movies, maybe consider giving it a whirl, but really, the only thing you need to know is that Alyssa Milano has nothing to do with it.


Alyssa has move on, as she should. As Alyssa herself said once:


I really hope my Poison Ivy II days are behind me.


Alyssa should be proud of her work in "Embrace of the Vampire," because she looks fantastic and really does produce some good acting. At the time, Alyssa herself seemed to think so, too, because she chose to film her next project, the aforementioned "Poison Ivy II," with the same director, Anne Goursaud (editor of "Bram Stoker's Dracula"). One doesn't follow a director from project to project unless you figure she did a good job with you the previous time. Goursaud, incidentally, very much remains in the business, though more as a film editor than director these days.


That really is all you need to know about Alyssa Milano in "Embrace of the Vampire." If you're a Milano fan, you may enjoy it.