The "Poison Ivy" franchise started out with high intentions.  Several reputable actors were in the 1992 original, notably Tom Skerritt, Cheryl Ladd and Drew Barrymore. It told the tale of a seemingly innocent girl who befriends a loser daughter and schemes her way into taking over the entire family. Alyssa Milano takes over the franchise in "Poison Ivy II," directed by Anne Goursaud. 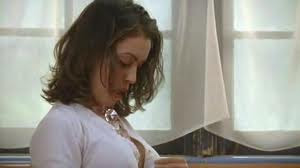 The original struck a chord with viewers, mostly because Drew Barrymore played on the "Lolita" theme and dramatically morphed from innocent to sexy. With that surprise success came the unexpected need for a sequel to cash in, and that's where "Poison Ivy II" came in.


With the audience in place, the producers went the schlock route and emphasized the sex, dumbed down the writing and kept costs low by hiring cheap actors. Alyssa Milano was in between TV series at this point, and had been reduced to playing off her her years as a child star by going the sexy route.  She had just starred in the extremely risqué "Embrace of the Vampire" and went topless on "The Outer Limits." The transition from child star to adult actress was proving extremely awkward. With the unexpected success of "Embrace of the Vampire" behind her, she moved on to the higher profile "Poison Ivy" franchise to play Lily Leonetti. She brought along her "Vampire" director, Anne Goursaud, a proven expert at soft-core exploitation. Goursaud uses many of the same techniques that she employed in that earlier film, including a weird party scene to make Lily look edgy.


As is often the case in these low-rent rip-offs of high class productions, there is only the most tenuous of connections to the original. The original stars are all gone (which in the case of the very butch Sara Gilbert is a blessing), and in their place we have Alyssa and a bunch of no-names. Really, the only reason to watch this now is to see Alyssa once again going topless and playing the "simulated sex" game. Seriously, if you recognize the name of any of the other actors in "Poison Ivy II," odds are that you are related to them.


For my money, "Embrace of the Vampire" showed Alyssa off to better advantage than "Poison Ivy II," but there are a few worthy scenes of her in this film, too. Alyssa becomes the object of lust of her art instructor, and poses nude for him. While flattered, Alyssa really isn't into him. Instead, she has to placate her muscular boyfriend, which she does several times to very good effect.


Alyssa knew what she was doing. Britney Spears, Christina Aguilera, Miley Cyrus and a whole slew of other former female child stars have followed the same well-trod path of "sexing it up" in order to escape their child-actor images. Shed the innocent-girl image or face oblivion, and these girls all know which fork in the road to take. Since Alyssa was cute enough to pass muster, it worked, and eventually she got "Charmed." So don't feel sorry for Alyssa for starring in low-rent exploitation flicks, she was using you, the viewer, not the other way around. As Alyssa said much later, presumably after counting her money, "I hope my 'Poison Ivy' days are behind me." The cynical strategy worked, and now she is back in "prestige" productions.


Really, that's all anyone needs to know about "Poison Ivy II," written by Chloe King. Alyssa prances about, teases some people and satisfied others. Jaime Pressley followed a year later in yet another lame sequel of the Poison Ivy franchise, showcasing her smoking body. That film worked out precisely the same way for her, leading to several more risqué movie roles before landing "Earl." After that, the franchise mercifully died - at least for now.


Alyssa doesn't show much, and we'd seen it all before by that point. However, the production values are much higher in "Poison Ivy II" than they were in "Vampire," so it is worth a look. Goursaud did another couple of exploitation projects, including "Another Nine & a Half Weeks," before giving up the director's chair and returning to her real talent: editing. Here, Goursaud supervises a great job of editing: we see Alyssa in the show, seducing her boyfriend, having sex with her boyfriend, posing topless for her art instructor, and so on and so forth, all edited beautifully. If seeing Alyssa's body is that much of a treat for you, give this one a look, otherwise, you will be bored silly by the end.