Hotness, Thy Name Is Jennifer Connelly


"The Hot Spot" (1990) from Orion Pictures is one of Dennis Hopper's rare directing projects other than the legendary "Easy Rider," and he makes the most of it. We have the standard tale of drifter Harry Madox (Don Johnson), who winds up in what appears to be a sleepy little town. However, guess what, the small town actually is crawling with intrigue. Go figure! Harry pulls off a bank heist and is under suspicion by the Sheriff (Barry Corbin), but that is just the start of his problems. A romantic triangle then develops between Johnson, the wife of his boss Dolly Harshaw (Virginia Madsen), and shy young clerk Gloria Harper where he works (hot young Jennifer Connelly). Dolly is persistent. Very persistent.

Don Johnson is his usual winning self as the scheming Harry Madox. You know what to expect with Don Johnson: smooth with the ladies, affable to everyone, conniving when off on his own. Don Johnson, who was just winding up his classic "Miami Vice" series, is the very essence of cool. Jennifer Connelly and Virginia Madsen are around to represent opposite ends of the romantic pole: Connelly sweet and apparently innocent, Madsen scheming and vixenish.

You never know what to expect in Jennifer Connelly films, and this is one of her best. Connelly is delightful, and she plays up Gloria's innocence. Madox has no trouble handling Gloria, but Dolly proves to be his match. Aside from Dolly, Harry handles everything thrown at him without any trouble at all, but Dolly ultimately gets what she wants from him despite his weak protestations. Remember, Don Johnson is the guy who in real life was caught driving with a billion dollars in his car. A BILLION DOLLARS. You don't get any cooler than that. He knows how to play smooth. That his character would be fought over by two delightful ladies requires absolutely no stretch of the imagination.


There are all sorts of little flourishes that mark this as a Dennis Hopper film. One is the fact that Connelly's character, who had been a child star, disrobes and (it is strongly implied) has a sapphic fling down at the local watering hole. So, maybe Gloria is not quite as innocent as she appears.


Another Hopper flourish in "The Hot Spot" is that Virginia Madsen's Dolly Harshaw is flagrantly sexual in a very direct way. There are no two ways around it, when Hopper said he wanted a sex scene, he meant it, and Madsen complied. This is very typical in Hopper's films, with all subtlety thrown out the window. Oh, and Dolly drives a truly rad car with a pink steering wheel.


The most famous scene in "The Hot Spot" - some might say notorious -  is when Connelly goes down to the lake with a gal pal (a very topless Debra Cole) and takes off her own bikini, top and (apparently) bottom. Believe me, "The Hot Spot" is worth watching just to see that spectacular moment in cinematic history. Of all Jennifer Connelly films, "The Hot Spot" is probably the best for revealing her charms.

It appears that Connelly herself also goes bottomless in that scene, in a dorsal kind of way, if you get my meaning. Others think it is a body double, but it appears to be her, though the scene is filmed from a distance so it is hard to judge. In any event, in HD you get a pretty good view of just about everything that is on display. So, you should definitely not go the Blu-ray route if that sort of thing offends you. And the reverse. And so on. 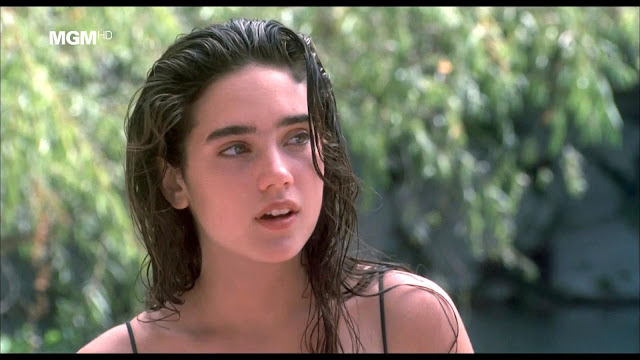 There are some who still take the time to argue over whether Madsen's scenes or Connelly's are hotter. Madsen, according to Hopper, was "very embarrassed" by the amount of her nudity in this film. To me, debating who was hotter is a pointless argument, and Madsen has nothing to be ashamed about. The winner to me is no contest, but draw your own conclusions. 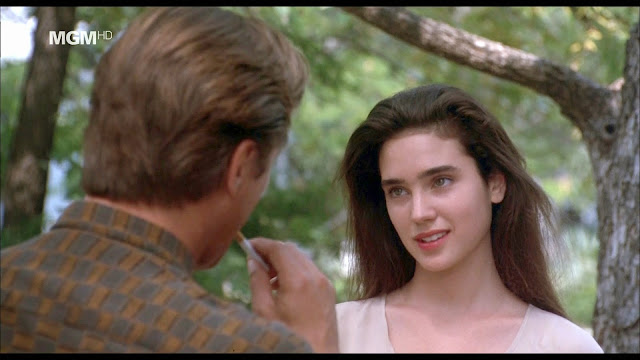 Both Connelly and Madsen go the extra mile, and they both are at the peak of their hotness. Why make it a competition? While Connelly will draw you in, you might very well conclude that the very accommodating Madsen turns out to be the film's secret weapon. Hopper was a very, very wise man, and here he had a full arsenal of loveliness with which to play.


Be that as it may, one must take a stand in life: Jennifer's appearance is by far the sexiest thing on the screen in "The Hot Spot," as you might expect in a Jennifer Connelly film. In fact, I will go further and say that it is among the sexiest things on the screen in the entire decade of the 1990s. Thus, this decision is no slight to Virginia Madsen, who would have blown out the lights against virtually any other competition. It is because of how innocently Connelly's character is portrayed at first and then how unexpectedly her sudden immodesty appears, as if from a different film, that the character still resonates. Madsen is sexy, but let's be real: she plays a tramp, and the unveiling of a tramp is never as fine as that of a virginal little darling. You know (or remember?) that girl in high school/college, the one who is/was just so sweet and innocent and apparently oblivious to her own smokin' curves? Well, that's Jennifer Connelly in "The Hot Spot."


If the screenshots above do not make you want to see this romantic thriller, then stay far, far away from it and thank me for the heads up. What you see there is just the appetizer for the main attraction in "The Hot Spot."  On the other hand, if those shots do entice you, then you are likely to agree with me that "The Hot Spot" is a great, sexy, "footloose drifter gets in deeper and deeper in the wrong small town" kind of film. They made very good sleaze of this type in the '80s (see "Two Moon Junction," "Dangerous Liaisons" and "Mischief," for instance) and also some years later (Femme Fatale). So, if you are familiar with those films, you know the company "The Hot Spot" keeps and whether you might be interested in watching it. 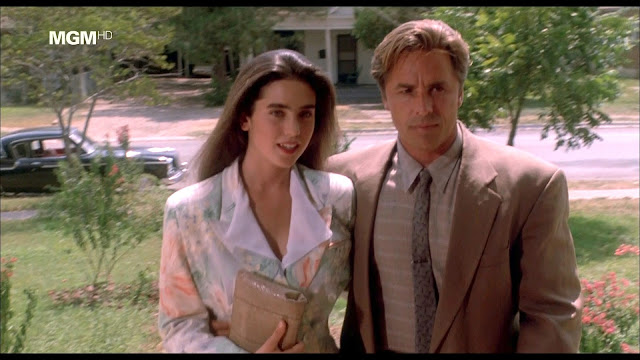 Jennifer Connelly, a former child star, quickly went on to a starring role in her next film, "Career Opportunities," so "The Hot Spot" was a milestone in her career. That film is notorious for focusing about as much on Jennifer's clothed body as is physically possible, but she does keep her clothes on there. "The Hot Spot" is at the top of the pile due to its free-spirited nature, the bonuses being Johnson in the lead, Connelly before she won her Oscar, and Madsen sneaking up out of nowhere to almost steal the film. My conclusion? "The Hot Spot" is a great way to spend an evening. 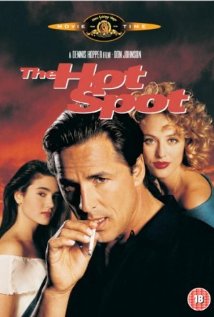