Jane Fonda (Lady Jayne Seymour Fonda, born December 21, 1937) is an American actress, occasional fashion model and fitness video creator. She is a two-time Academy Award winner, and in 2014, she was the recipient of the American Film Institute AFI Life Achievement Award.


Jane is the daughter of legendary actor Henry Fonda. Their family didn't come over on the Mayflower, but they weren't far behind, arriving in the 1650s.


Jane has a brother, Peter, and maternal half-sister, Frances. Peter also is an Academy Award nominee (twice) and is the father of Bridget Fonda.


Jane went to Vassar, and rumors swirled about her time there. The story, apocryphal but fun, goes that she she was told once at dinner to go upstairs and change because she wasn't wearing gloves, and nobody was allowed to eat without them. She supposedly then came down for dinner naked save for the gloves. 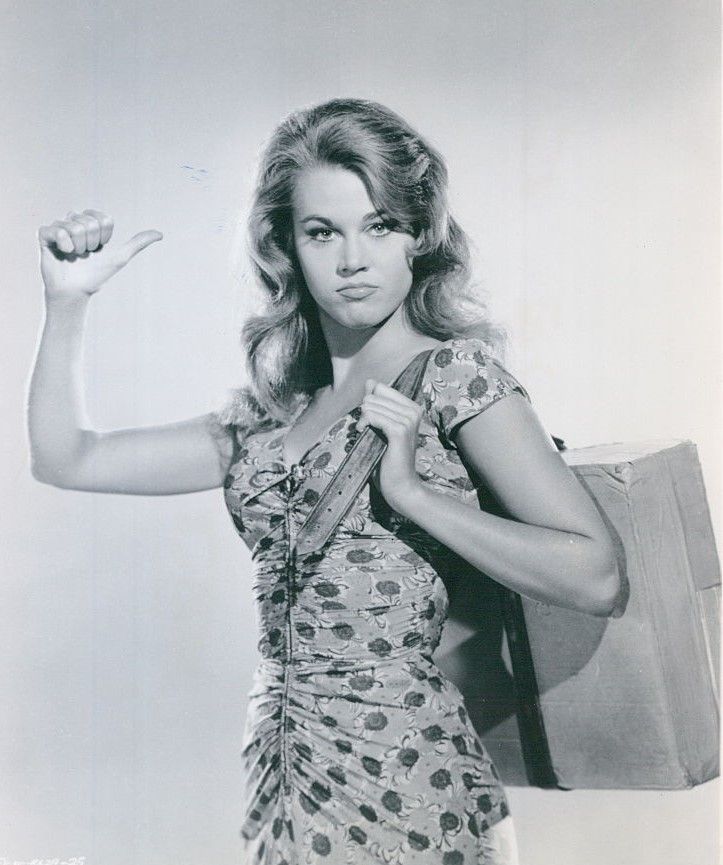 Jane acted in a series of mediocre films in the early 1960s, usually playing a brainless young blonde. However, it was invaluable training which she later put to very good use. 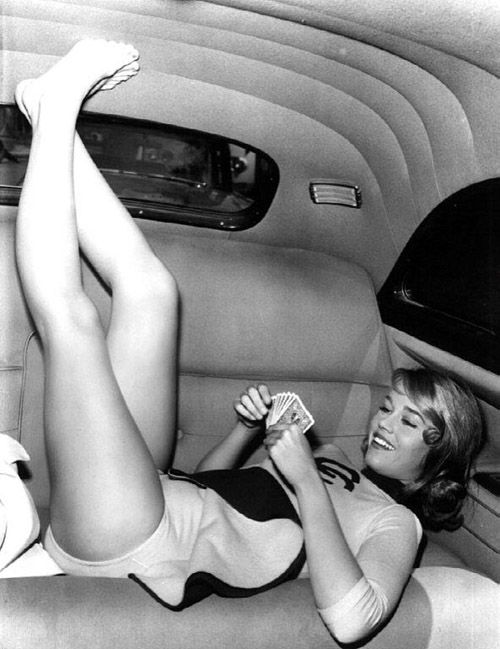 She acted with some top names, such as Robert Redford, Lee Marvin and Alain Delon.


She gained a great deal of experience, including learning how to sell a character and a film, which would prove invaluable in coming years.


While just a minor Hollywood star, Jane was still the daughter of Hollywood royalty. She became a jetsetter who spent a great deal of time in Paris. After she married Vadim, though, she decided to give him what he wanted and film a sexy science fiction film, "Barbarella."


The film marked a turning point for Jane. She was able to pick and choose her next film role, and she picked "They Shoot Horses, Don't They." It was a wise choice, turning Jane into a respected dramatic actress and earning her the first of seven Oscar nominations, including two wins. She credits the role with changing her career toward serious roles. 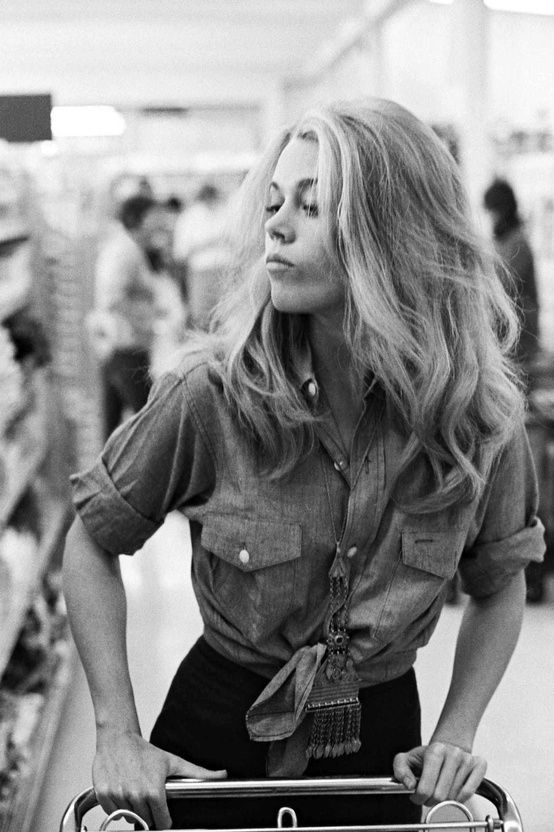 After that, Jane became an A-list actress. She also adopted a Bohemian lifestyle in keeping with the times and joined the anti-Vietnam protests. This earned her life-long enmity by many veterans of the war. She doesn't talk about that period of her life very much in public anymore. 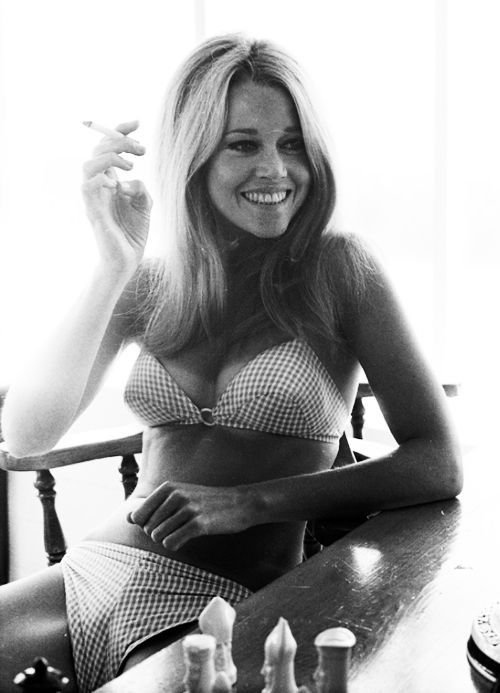 Jane earned an Oscar a few years later with her role as a callgirl in "Klute." She won another later in the decade for "Coming Home." It is not reaching to say that Jane was the top Hollywood actress of the 1970s. However, somewhat oddly, her fee dropped substantially during the middle portion of the decade, perhaps due to all the controversial publicity she was receiving. She recovered from that setback with "Julia" (1977), for which she received another nomination. 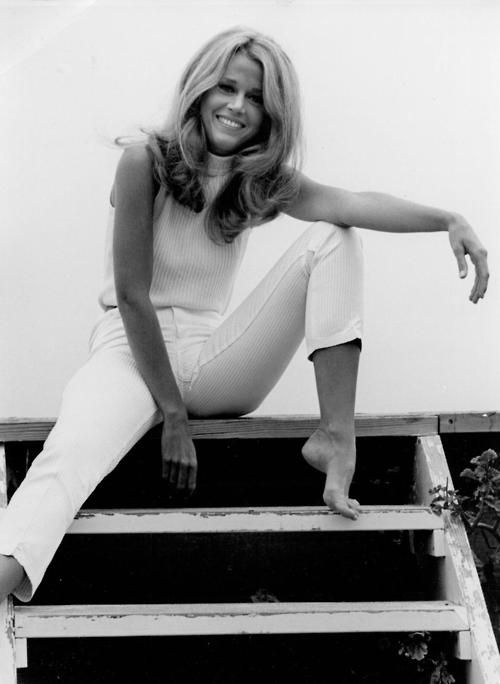 As the '80s arrived, Jane remained at the top of her game, starring with her father Henry in the role that earned him an Oscar in "On Golden Pond" (1981). It was in many ways the pinnacle of her film career, and she never again had such a great role. Her final nomination was for "The Morning After" in 1987, a decidedly mediocre film.


Jane expanded her sway behind the camera throughout the '70s and '80s, and the huge amounts of money she was earning gave her the opportunity to repay her father for some of what he had done for her. She produced "On Golden Pond" and forever after very proud to have given her father the chance at the end of his life to receive the honor of an Academy Award. It was his final film and he passed away soon after.


The VCR also made its appearance in the early '80s, and Jane climbed aboard by filming and selling a line of exercise videos. Her most popular one, "Jane Fonda's Workout Video," sold 17 million copies. Clad in spandex and performing entire routines herself, Jane became the top-selling home video star of all time.


Jane's career wound down in the '80s, starring in "The Old Gringo" with Gregory Peck in 1989 and a couple of other sub-par projects before officially retiring. She married billionaire Ted Turner, and they were happy for most of the 1990s. Eventually, though, Jane got the itch to return to acting. She divorced Ted and found a comeback vehicle in the 2005 Jennifer Lopez film "Monster-in-Law."


Since then, Jane has resumed her Hollywood career, including a cable television show with Lily Tomlin. Now deep into her '70s, Jane still looks fabulous, and the years have been very kind to her.


Jane continues acting, and even mentions making a sequel to "Barbarella' some day. If any actress could pull it off at the age of 80, Jane Fonda could.