Joan Bennett and Some Other Fancy Rides


"Highway Dragnet" (1954), directed by Nathan Juran, stars Richard Conte, Joan Bennett, Wanda Hendrix and Reed Hadley (who has an amazing voice) in a routine murder mystery/chase film that almost certainly would have been the underbill on a typical double feature offering. Conte plays John Cassavetes of 20 years later, Hendrix does her best Mary Anne from "Gilligan's Island," and Joan plays, well, Joan at her diva best. I've already given you the plot above in only four words, but let me make it a little plainer: there's a murder, then a lengthy car chase, and then a resolution. Really, that's "Highway Dragnet," and everything else is simply padding (and I'm not talking about Joan Bennett's flowing, "Lawrence of Arabia" dress).


The plot (Roger Corman is involved with that) is pedestrian - Joan Bennet's character basically announces the solution to the "big mystery" about halfway through - but, as I've said, I already gave you the plot. To give you an idea of the proceedings, the absurd coincidences abound (what are the odds that there would be two US Marines in civilian clothes being stopped at the same time at the same police checkpoint in the middle of the desert, enabling the suspect to get away?) which is part of the hammy fun. Joan gets lost in the desert, and everyone else is stumbling around looking for her and actually looking like they got lost in the desert - and she suddenly turns up unannounced as if she just dropped in by helicopter from a Beverly Hills beauty parlor.


What I want to do here instead is to make a few observations about the film as if it didn't have a plot - which is well-crafted with lots of complications and numerous "oh the phone rang so the suspect gets away from certain capture" moments. In other words, I am going to answer the question, why might you want to spend your time watching "Highway Dragnet" if a mundane murder mystery is not your cup of java?


I will confess here first that I decided to watch this film because I thought Jack Webb would pop up somewhere - he doesn't, but would have played the Sheriff perfectly. it's that kind of film - guy on the lam, so we get a lot of police procedural stuff. You know the drill if you've ever seen any episodes of any incarnation of "Dragnet."


Anyway, this is a '50s car film. You will see an exotic parade of Nashes, and Kaisers in their original, dirty, busted-up true lives. In other words, none of the cars is in that "ultra-restored without a dent or smudge and that you can see yourself in the shine" condition that you see in more recent films that attempt to portray the '50s. Instead, this is a companion piece to, oh, "The Girl in Black Stockings" (1957), for example - lots of fabulous old girls that have whitewalls and hood ornaments and big, roomy trunks. These are the types of cars that would break down every 50 miles in the desert, but that was okay because then you would just pop the hood up, throw in some water or tweak the carburetor a little and you'd be rolling again. Guys were handy to have around if only because they knew cars - an undeniable fact of '50s life which basically sets up our story in "Highway Dragnet."


Did you know that if you stay in a state for over 30 days, you technically are supposed to re-register your car there? You'll learn that little tidbit in "Highway Dragnet" - and it's still true today. That's how deeply into car culture "Highway Dragnet" is. If you are a car buff, this is your film. Just don't expect a lot of tail-fins, those only came along a few years later. These are big, boxy, roomy cars that easily sat three in a seat. Oh, and if you were hungry, where would you stop? Why, the place called "Eats," of course. 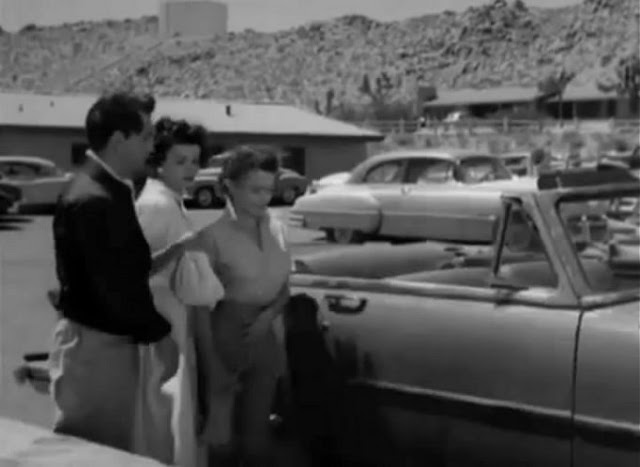 If you are still reading this and found any of the above interesting - this may be a good choice for you. Just ignore the silly plot, enjoy the visuals, drink in Joan Bennett's incredibly hammy performance, and set your Fluid Drive at cruising speed. Lots of evocative scenes of things gone by, such as the Salton Sea with actual water in it, Apple Valley Inn at its height, Fremont Street in its early glory. There's also lots of snarky, subversive, misleading dialog that is just hysterical, such as:


Mr. Carson: Say, you don't think you'll find him around here, do you?
Det. Sgt. Ben Barnett: I don't know, I'm not familiar with the habits of the Strap Killer.

The actor who played Barnett, Tom Hubbard, is given credit for "additional dialog," so he may have been the one that came up with some of the snarkiness on the spot.


Okay, overall, can I recommend watching "Highway Dragnet"? The answer to that is yes. It is quick (70-minute), clean (Joan is spotless) fun, and I honestly felt good about the ending, trite as it was. The set-up is good enough that when you see Joan writing in the Salton Sea, it's a great emotional payoff. An unknown classic if you like cheap, unassuming drive-in flicks.