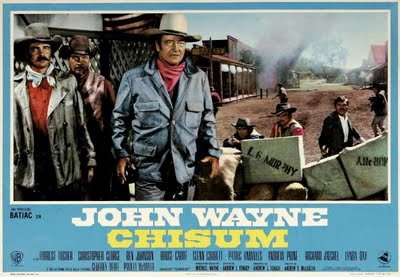 "Chisum" (1970) is one of the last of the old-time Westerns. It begins and ends with "The Duke," John Wayne, high on a hillside, quietly overlooking the valley where the film's action takes place. It's as if Wayne is personifying the eternal values with which he was by then inseparably associated. He seems ready to spring into action as necessary, like an American version of England's once and future king. There is a classic quality that is enhanced by the opening and closing credits. It is as if the film-makers were intentionally closing the books on Wayne's long, iconic career as the best of the movie cowboys, which was a bit early, but works anyway.


Sentimentality gushes out of this film. At one point, Wayne's character even pulls out an old wedding photo to show his niece, nicely played by Pamela McMyler, and earnestly affirms his love for the land (Durango,Mexico, a beautiful spot where Wayne filmed several films during the '70s and bought a ranch). Later, he goes out of his way to show respect for an old Indian Chief, perhaps as penance for a somewhat opposite scene in "The Searchers." Long-time sidekick Ben Johnson is around so that Wayne has someone with whom to squabble, and Forrest Tucker - fresh off F-Troop - is the villain whom Wayne must overcome after the usual twists and turns.


Wayne, while overseeing the proceedings (the famous Lincoln County Cattle War) like a grand seigneur, passes the baton to the younger generation, here personified by Glenn Corbett as Pat Garrett and Geoffrey Deuel (Pete's brother) as a morally torn Billy the Kid. A favorite scene due to its blatant lack of subtlety (yes, I know it's over the top, so what?) is where Billy reads the Bible by a pond while practicing his marksmanship. When Billy's saintly mentor, Henry Tunstall, is killed by the Tucker character's minions, all heck breaks loose, with shootouts and legal maneuvers extending up to the territorial Governor and beyond. It's always clear that the range war is a sideshow, though - the real action is watching Wayne expertly take his bows after the previous year's "True Grit."


But there is plenty of action. Wayne gets to punch out Tucker not once, but twice, and there are gunfights every few minutes. The romantic subplots mercifully are kept to a minimum, and there are a fair number of comic and clearly ironic lines (Tucker's character, after he has personally interceded with the Governor to further his agenda, had his stooge appointed Sheriff, and is in the middle of a raging gunfight: "I can't interfere with the law.") There is the standard lighthearted air that permeated several Wayne films during this period, such as in "Undefeated."


The film's main weakness for me is the busy direction. Andrew V. McLaglen is competent, with an eye for framing interesting shots, but he falls in love with his zoom lens. He continually reaches for too-clever shots, always trying to have something happening in both the fore- and background, zipping between them in a way that looks way too staged. These and other indulgent touches are distracting and unnecessary. Wayne and company overcome them, but too bad that John Ford had retired.


When this film was released, it was completely at odds with the social climate of the times. You almost had to be a present or former Boy Scout to go see it. But quality tells in the end, and there is a timelessness to this film that you won't find in too many other early '70s releases that were considered cool at the time.


Love the Merle Haggard/William Conrad theme song. "Chisum, John Chisum." If you like Wayne and westerns, you won't go wrong with "Chisum."