Gale Storm ("Mitzi Mayo") and John Shelton ("Jimmy") star as ordinary American private citizens who happen to work in the film industry in this routine spy story set in WWII Los Angeles. They find out about a German/Japanese spy ring that is trying to steal a new searchlight designed by Mitzi's father (killed by the spies) and also plotting to support a supposed Japanese raid on Los Angeles. When this film was made, such a raid was eminently possible, and in fact, some still wonder why the Japanese never bothered. So the plot of "Foreign Agent" (1942), directed by William Beaudine, was ripped right out of the day's headlines.

The only real innovation in the plot is that Mitzi and her man are actors who are adept at foreign accents. This comes into play at a key moment at the film's end, and is the only real twist in the entire film. Otherwise, there is a lot of talking and the usual Hollywood effort to call into question the motives of anyone who spoke out against the war (see "Spy Ship" for another 1942 example of this) by having the Germans use an "America First" type of organization as cover for their evil deeds. There also is a curious scene with a specific purpose: a first-generation American whose family was still back in mother Russia stands up to some German thugs at a rally.  The fact that he is the spitting image of Uncle Joe himself helped show support for new Ally the Soviet Union. 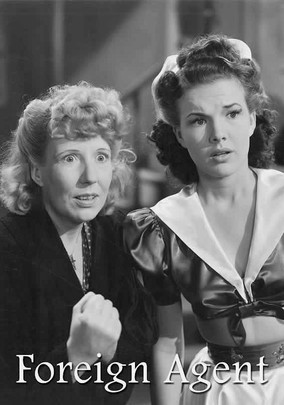 Both sides are using wiretaps on each other, and our heroes find out first and feed the bad guys false information. Too late, the bad guys find out they are being taped, too, and that leads to the plot's climax. For such a serious issue, though, the principals all seem to take things very lightly, which gives the film an almost carefree attitude to the whole subject. The Germans bumble around and act tough but ultimately aren't very frightening. The good guys appear to be freelancing without a whole lot of support from the Feds, who one might think would have a lot more people involved in chasing down suspected spies. But it is made very, very clear who are the good guys and who are bad - why, the bad guys are cheap and quibble over paying their killers an extra $50 a week! And the good guys are just decent, honest Americans who say they want to punch the bad guys "red, white and blue." 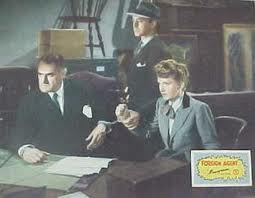 Director William "One Take" Beaudine gets the story out without any unnecessary sub-plots or meandering - that was his style. Shoot it, print it, let's go have lunch. The film runs just over an hour, and the time passes fairly quickly. Not a lot happens, there are no surprises, and things are wrapped up nicely.

The sets of Hollywood look authentic, as if Beaudine just filmed his own studio buildings, and the characters' apartments look very realistic as well.  Given that Monogram was a poverty-row studio, Beaudine probably cut costs wherever he could and filmed at his actors' homes, with his own studio as a set, and so on.


Wait for Gale to sing the classic "It's Taps for the Japs" and you'll see a star in the making.

Gale has a curiously short resume for someone who was in the business for 50 years, and her career barely survived the 1950s due to a drinking problem.  She later went on to star in "My Little Margie" and, of course, "The Gale Storm Show" before winding up her career, like so many others, making "The Love Boat" and "Murder, She Wrote" appearances.  Her problems were far in the future when she made this film, though.  The 1940s were a terrific time for strong young starlets - energetic and talented but not necessarily blindingly attractive (and I know some will say they ALL were stunning, but let's be real - and Storm fit neatly into this category along with Deanna Durbin, Judy Garland, Kathryn Grayson and several others.

The film includes lots of reinforcement of the usual wartime admonitions - signs in the background read "Remember Pearl Harbor," and object lessons are given of the saying "Loose lips sink ships." A pleasant time killer that shows that Hollywood was behind the war effort, nothing more.