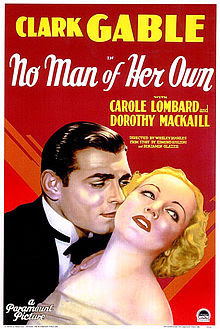 "No Man of Her Own" (1932), directed by Wesley Ruggles and starring Clark Gable and Carole Lombard, has a distinctly modern look to it. Gable, playing rakish gambler "Babe," is extremely open and obvious about his intentions towards Carole Lombard, playing librarian Connie Randall in a small town where Babe is hiding out from the law. Lombard, in turn, is fantastically open and frank about her own passions towards him in a "girl talk" conversation with her fellow librarian. Eventually, Carole dances in her underwear, and Gable is shown in a very unfavorable light as a cheater at cards, which only enhances his rakishness.


There's no doubt that this film was playing to the crowd, which was hurting badly during the Great Depression and searching for any kind of enjoyment. There are hints of this throughout the film - Carole is shown throwing dice with the newsboy before heading to the dull job that she needs to pay the rent, while Gable fleeces some stuffed shirts without any hint of remorse. The air of desperation in Lombard's eyes as she contemplates Gable as her possible ticket out of Boredom, USA is palpable, and her own lust for something more is shown frankly and openly.


When, overcome with desire, she squeaks out the 1930s catch-phrase "See you in church," you know that's the last place she would want to meet him. Overall, this is one of the best films ever to deal with female passion, and one whose very openness some blame for the reactionary crowd's imposition of the dreadful Hayes Code a couple of years later.


This film has some of the sexiest scenes from the 1930s. It is perhaps the best-known "forgotten" film of all time. That is because it is the only on-screen pairing of Carole Lombard and Clark Gable, who of course later got married and had a lively and ultimately tragic romance that Hollywood has made many films about, including some fairly recently. Pretty much any time the topic of Gable and Lombard comes up, they show clips from this film, even though they supposedly didn't hook up until years later. Unless you are a film historian or fan of old movies, you are very unlikely to have ever heard of it, much less seen it. But it is a vital part of screen history.


Clark Gable, looking incredibly young and without his later mustache, exhibits a dapper charm seldom seen on the screen before or since. Carole Lombard never looked better, and there is obvious chemistry between the two.  Legend has it that she sent pointedly sent him a ham after wrapping the film, which is its own kind of subtle female flirtation. "No Man" shows how much we missed because of the prudish Hayes film censorship code that came into effect a couple of years after this film.


The plot really doesn't matter much, but for what it's worth, Gable plays a NYC card sharp who meets attractive but mousy - apparently - librarian Carole in a sleepy upstate, NY town (upstate New York was considered the depths of rural simplicity in those days). The highlight of the film is the seduction scene in Lombard's library, with Gable taking chances with her that today most likely would land him in jail.


But the scene works perfectly, thanks to Lombard, who certainly knew how to play a smitten woman resisting only because she "should." If you only want to watch about five minutes of 1930s cinema, those are the minutes to watch, and yes, that includes anything from "Gone With the Wind." Do you really think there is a chance that Lombard can resist Gable's technique?


A favorite scene is Lombard prancing around her apartment in her underwear, still a sexy scene all these years later. Other terrific scenes follow, particularly one at Lombard's home where she practically swoons over Gable, but the sexual tension gradually goes down from there. Lombard awakening in the train car going down to NYC foreshadows a similar one in Hitchcock's 1958 "North By Northwest," if not also the aforementioned "Gone with the Wind" (a scene which, I think, strongly suggests that Lombard, who desperately wanted the part, could have handled the Scarlett O'Hara role just fine, thank you very much).


From that point, though, we get more comedy than romance, and there isn't a whole lot of comedy. We do get humorous shots of the two taking individual showers. Ultimately, though, the film devolves into rather mundane complications with Gable's "job" hustling naive card players, pretending to have a day job, and so forth. It is pretty obvious from that point how this film is going to wind up.


The easy thing to do would have been to end the film before Gable returns to everyday life. I'm sure they could have extended the seduction scenes out and concluded with the certainty of a wedding. "No Man," though, bravely ventures to show the "and they lived happily ever after" part, which has all sorts of bumps in the road. That makes the film a bit uneven and introduces a decided change in tone about midway through, not particularly for the good. But I enjoyed the second half, too. It's just different and rather formulaic.


There are humorous aspects throughout, but I hesitate to label this a plain comedy, or, for that matter, a "screwball" comedy. It is neither of those things. It is more a romantic comedy, with the emphasis on "romantic." Lombard is delectable. I have a difficult (though not impossible by any means) time finding female stars of the '30s attractive because of the fussy fashions and mannerisms of the day, but there's no problem with Carole Lombard in this film. She is the real deal, quite attractive by any standard.

Legend has it that Gable and Lombard kept their distance during filming while off-camera. She hated being loaned out by her studio, and was happily married to William Powell. He reportedly gifted her with a pair of ballerina slippers with a note that said, "To a true primadonna," while she gave him a canned ham with his picture attached. They never starred in another film again.


Gable and Lombard went on to have their very own romance years after this film wrapped. Strangely enough, after starring with Gable while not dating him and being married to Powell, Lombard later starred with Powell in "My Man Godfrey" after divorcing him but while dating Gable.

"No Man of Her Own" with Gable and Lombard is recommended for romantics of all ages. Don't confuse this with the 1950 Barbara Stanwyck film of the same name, a soaper which is nothing special unless you are a big Babs fan.