"Inventing the Abbotts" (1997), directed by Pat O'Connor for Fox 2000 Entertainment, is an obscure chick flick that has something for the guys. It is an enjoyable small-town drama/romance that potentially could have follow in the path established by notorious teenage romance films such as "The Hot Spot," "Career Opportunities" and "Mischief," but doesn't. That path, of course, is titillating and sexually frank.While "Abbotts" had the talent to do so, with stunning young leads Liv Tyler and Jennifer Connelly, it places a lot more emphasis on the romance and less on the sexy. As fans of Jennifer Connelly films understand, though, you never know what to expect from her. There are a couple of very sexy scenes showing off Connelly's hotness which we'll get to below. Think of it as the difference between a romance novel and a men's magazine. This is the romance novel, though "Abbotts" has more of a dramatic edge to it than your usual book with Fabio on the cover.


It is a small town in 1950s Illinois, and two families are tied together by business. Jacey (Billy Crudup) and Doug (Joaquin Phoenix) Hold are fatherless because of an accident. The boys believe that Lloyd Abbott (Will Patton), their late father's business partner, stole a lucrative automobile patent from his papers after his death, making him rich and them poor. There also apparently was a failed overture by Lloyd toward the boys' mother, Helen (Kathy Baker), after the father died. Lloyd subsequently married Joan (Barbara Williams), who runs her mouth off about Helen, and raised three daughters, Alice (Joanna Going), Pamela (Tyler) and Eleanor (Connelly). The boys and girls all young adults, so things get hot.


Jacey desperately wants to inflict revenge on Lloyd. Doug worships his older brother and his free-thinking ways. The Abbotts are very wealthy because of Lloyd's business, while Helen is just scratching by. Mr. Abbott is very protective of his daughters, but they are at that age when their hormones are running wild.


Jacey comes up with a plan to get what he wants, and that involves seducing each of the daughters by turn. He does whatever it takes to seduce whichever Abbott daughter will have him. The oldest daughter, Alice, seems a likely target, but she gets engaged to be married, so she gets crossed off the list. He does seduce Eleanor, who Doug also likes, but that isn't too difficult. She is a bit of a wild girl, and Jacey and Eleanor are caught making out by Lloyd. He promptly sends Eleanor away to stewardess school and has a very frank talk about the Holt boys staying away from his daughters.


Doug, meanwhile, falls for the youngest daughter, Pamela, who is about to graduate from high school. Together they experiment as they learn about love, and she is determined to have him only if he loves her for who she is rather than her father's money. She is a little older and goes away to school, and it looks as though they may lose track of each other. Happily, after graduation he winds up in the same city, and they renew their acquaintance. Alice, meanwhile, has a failed marriage that produces a child.


Two years later, the boys' mother, played by the reliable Kathy Baker ("Picket Fences"), dies. Everyone comes back for the funeral. While they are going through their mother's belongings, they find a letter from their father in which he states that he had sold the patent everybody thought Lloyd had stolen. This means that Lloyd is not guilty of causing their father's death, removing the reason for Jacey to avenge himself upon the Abbott family. It also eliminates Lloyd's suspicions about Doug pursuing Pamela, and perhaps creates an opening for Jacey and Alice to get together.


An unbilled Michael Keaton narrates "Inventing the Abbotts" from the point of view of Doug. Perhaps they just wanted an older-sounding voice to make it clear it is being told from the present. The film takes an unexpected path, as it starts out as if it will turn into a grand festival of Hamlet-style revenge and comeuppance, but switches gears midway through and instead turns into simply the romantic pursuit by Doug of Pamela. Everybody does a fine job of acting, and there is a great lesson to be learned about when you need to leave behind your personal baggage and move forward with your own life.


While the draw of "Inventing the Abbotts" is the romantic pursuit of the Abbott girls, the real relationship at the heart of the film is the one between competitive brothers Doug and Jacey. They are in conflict with each other about everything, not just the girls. Doug gradually learns to take Jacey for what he is, which is a bit of a louse driven by negative motives. Jacey's lust for revenge is stronger for his lust for any girl, and that is at the core of his character. As somebody puts it, if Lloyd Abbott didn't exist as someone to blame for his father's death and their misfortune, Jacey would have had to invent him (hence the title).


The script by Ken Hixon from a story by Sue Miller kind of meanders. If you get hooked by this film, it will the execution that does it. Doug is reckless and a bit of a rebel, but grows over time in a believable way. Jacey, on the other hand, is one-dimensional in his thirst for revenge, consumed by resentment that he must hide if his plot is to succeed. When that motivation is taken away from him, he must re-assess his entire angst-driven life.


The setting is terrific, and you really will believe that you are in a small 1950s town, with the classic cars and modest homes. They get all the little things right, and there are amusing scenes of the boys preparing for their encounters with the Abbott girls in outlandish ways that are true to the time. You could even argue that the plot is an homage to soap operas of the era. The dialogue is a bit too rough for an accurate portrayal of middle class suburbia in that period. Curse words were not used much in polite society except by sailors and the like. It also would have been nice if they had used more pop tunes from the era.


All that aside, Jennifer Connelly has a topless simulated sex scene that will either shock you or make the whole film worth watching. There also is a funny/sexy scene where Doug goes under a table to look up her skirt, which doesn't seem to bother Eleanor too much. In both scenes, she goes "Hi Doug," which is kind of an inside joke for those who've seen the film. Along those lines, Lloyd at one point gets to deliver to Jacey the charming admonition, ""Keep your dick out of my daughters." At least he knows how to make his point clearly!


Unfortunately, Jen largely disappears from the film after the first half hour, and it is up to Liv to carry the emotional tension. She does an OK job of being annoying as she toys with Doug's emotions, but it is an awkward shift in tone. She is not the best actress in the film, so focusing on her is a mistake. It would have been better if Jennifer had been around longer, even without any more revealing scenes. Among Jennifer Connelly films, this is one of her lesser efforts, but she still is the best thing in it. The good news is that i you are just watching this to see Jen's big moment, it comes fast and furious at the start, so you won't have to sit through the entire film waiting for it. 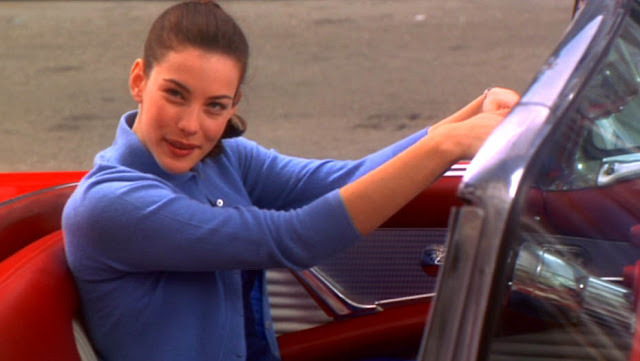 The pace is fairly slow, which on the plus side helps immerse you in the 1950s setting. Just don't expect a lot of excitement - this is a film about motivations and feelings. The best reason to see this film now is to catch these terrific rising young stars giving it their all before they went on to bigger things. If you have patience, you will be rewarded by "Inventing the Abbotts."

The original trailer is below: