I love old films - that is why I write reviews of so many - but simply because a film is old does not make it a classic. That, unfortunately, is the case with "All the Brothers Were Valiant" (1953). Let me warn you up front, the posters really oversold this film. The exciting graphics make it look as though "All the Brothers Were Valiant" is chock full of whaling, when in fact actual whaling comprises only a tiny portion of the film.


Robert Taylor and Stewart Granger star in this dark tale directed by Richard Thorpe about brothers feuding over just about everything while on an 1850s whaling adventure. The film is enjoyable not for the story, which is melodramatic, but the locales, which offer a good look at old-time whaling. 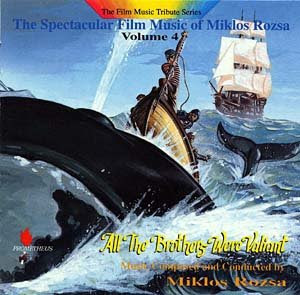 Both brothers are whaling ship Captains. Granger plays Mark Shore, lost and presumed dead during an earlier whaling trip. Taylor is Joel Shore, who not only has been named Captain of the same ship from which Mark disappeared, but also has taken Mark's supposed widow, played by Ann Blyth, as his own wife. Uh oh, Mark better be really dead.... When Mark inevitably is found by Joel's ship in the South Seas (what a coincidence!), all sorts of issues and complications arise.


One could enjoy this film simply as a psychological study of brothers who never resolved their childhood issues and now are repeating them on a larger stage. The brothers manifest this by flinging insults at each other concerning who is bringing more shame to the mighty Shore name. Personally, I don't think either of them brings much credit to it, and the entire issue is silly. In fact, I found the film's exclusive focus on the Shores and their problems with each other since toilet training to be elitist and stultifying. The tale could have been so much better with a broader focus. The brothers' tedious infighting about who is more ethical and brave is profitless mental masturbation when there are much bigger fish to fry, and close by, too.


The heart (I hesitate to say "moral") of the tale is the effect of greed on otherwise rational people. While "lost," Mark happened upon some pearls worth a fortune, but then lost them. He knows exactly where they are, though, and he wants them back. (He also happened upon a lovely native girl, played marvelously by Betta St. John, who saved his life at least twice. Inexplicably, she is shrugged off so casually that she isn't even given a name. I suppose it wouldn't matter to anyone in the film anyway, since it doesn't end with "Shore.") Joel doesn't want to go and retrieve the pearls, since he actually takes his whaling job seriously. Yes, that means there is brotherly conflict! This all plays out in a very dull, dreary way that some may find interesting, but I sure didn't.


Blyth works at stealing the picture, and does a good job of it early in the picture. Once brother Mark shows up, though, she starts fading into the background and ultimately practically disappears. Which is a shame, because Ann Blyth is radiant and deserved a better storyline. Even her character becomes infected by greed for the pearls, but rather than some kind of thoughtful insight about the nature of man and the bottomless pit that is greed, this only leads to yet more hand-wringing over who is the more worthy Shore.


Taylor is wooden and stoic, and he drags the picture down with his deadly monotone and lifeless line readings. He looks sedated when energy is in order. I actually like Robert Taylor as an actor, and his stoicism often plays out very nicely in films that involve a lot of mayhem, mystery or confusion (see instead "The Bribe" (1949), which perfectly complements Taylor's restrained persona and features awesome turns for him to play off by pros Charles Laughton and Vincent Price). Taylor's tendency to underplay emotions simply backfires here. The only intense scenes involve Granger's flashbacks, in which he falls in with some very dangerous men who lead him to the pearls on a very pretty South Seas island. I also found the views of old New Bedford to be very evocative.


There are some issues that I had with "All The Brothers Were Valiant" that you may or may not also have. Some might find the (one) whaling scene in the picture interesting. It is marred, however, by images of a whale being cut up like sausage. It is very graphic. You might hardly notice the scene - it all depends how sensitive you are to such things. This just shows that times have changed, you will never see anything like that in a current Hollywood film. Among other issues, the whaling ship in "All The Brothers Were Valiant" does not look real (it is much too clean and unworn), and there are odd lighting artifacts now and then in the special effects that detract from the realism. The drama is weak, and the climax completely lame and trite. The brothers supposedly are playing out rivalries from childhood, but the specifics are merely given lip service here and there (and they keep using the same phrase about taking toys away from one another, which sounds wacky coming from the mouths of grown men). In the end, blood turns out to be thicker than water in "All The Brothers Were Valiant" - go figure.


Stewart Granger valiantly tries to swash-buckle through the film, but rarely manages it. The title is meant to have multiple meanings, which, like much else in the script, is an unnecessary complication with a fuzzy implication. I realize that you are probably only reading a review to confirm your impression of how awesome this picture is - "They sure don't make them like that anymore!" - but this picture drags in all the wrong places, and several actors were simply miscast. The outstanding soundtrack by Miklós Rózsa is worth a listen if you enjoy stirring classical music - and it is excellent background music if you are doing other things.

Somebody once famously said about the Vietnam War that he would crawl there on broken glass to achieve peace there. Well, I would crawl on broken glass to make this the film it could and should have been, were that were possible. It misses by that much. "All the Brothers Were Valiant" is not terrible by any means, and worth a look if nothing else is on. Overall, "All the Brothers Were Valiant" is recommended for fans of the stars only, or those looking to be transported to a time and place that is far, far away.