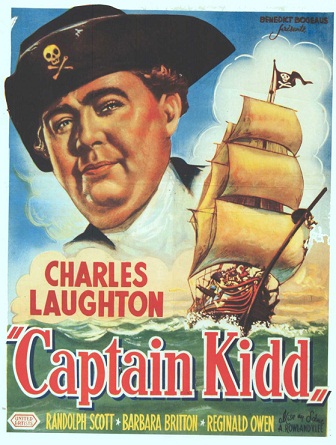 Charles Laughton had one of his most notoriously hammy roles as "Captain Kidd" (1945). His mannerisms in playing the ill-fated Captain became the template that was endlessly copied in rip-offs - oh wait, scratch that - homages in TV series of the 1960s and 1970s. It is a truly marvelous performance, conveying both uneducated simplicity and raw animal cunning along with a truly funky Cockney accent. The film is worth seeing if for no other reason than to see what everyone else was parodying. Randolph Scott of all people is along for the ride as one of the convicts that Kidd finds to crew his Crown-provided ship. He not only has a Southern accent, he also uses anachronistic expressions such as, "Let's wait until the coast is clear." Come on, this is not a gangster film. It does not take long to figure out that there is more to Scott's character than meets the eye.  Scott's star was riding high at the time, and some versions of the movie poster featured him as the star, above Laughton.  Certainly, he would have been more recognizable to some American viewers.


But both men do a fine job.  Among the general audience, thought, anyone who remembers the film today does so because of Laughton, not Scott.  No offense, Randolph.


The rest of the cast is fairly forgettable. John Carradine is wasted as one of Kidd's cohorts who provides little more than a sounding board for Kidd's schemes. Barbara Britton is a pretty face who gets to scream now and then and allow herself to be rescued. The only other actor who really stands out is Henry Daniell as King William, whom Kidd badly underestimates.


The scenery is exceptionally drab, and for a pirate film there are remarkably few battle scenes. The film is loaded with witty pirate sayings and intrigue, but nothing too elaborate. The quality of the print currently available is very bad, maybe due to its being made during wartime. "Kidd" is more a character study of the famous Captain than anything else, and at that it succeeds marvelously.


Incidentally, Laughton played Captain Kidd again several years later in "Abbott and Costello Meet Captain Kidd," and it is obvious that in that picture he is playing it strictly for laughs. He loses the Cockney accent and the social pretensions and resorts to bellowing out his lines. Seeing both pictures is worthwhile only to see the difference between Laughton making a serious dramatic effort, when he is unparalleled, and Laughton caricaturing himself, when he is just worth an occasional laugh. 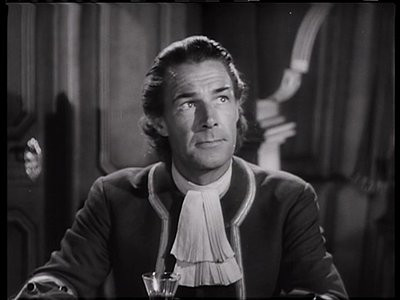 Not quite up there with Laughton classics such as "The Private Life of Henry VIII," but still worth a look.