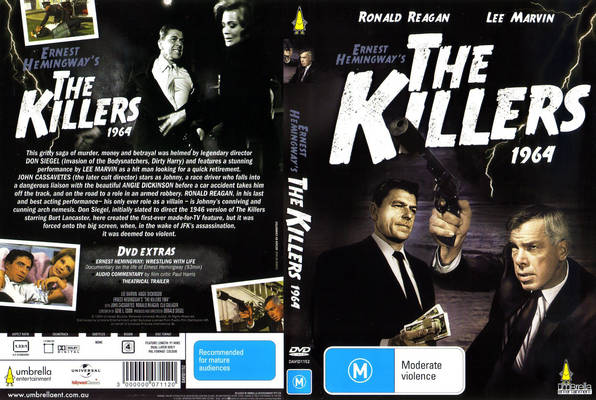 If you look at director Don Siegel's "The Killers" (1964), starring Lee Marvin, Ronald Reagan, John Cassavetes, Norman Fell, Clu Gulager, and Angie Dickinson, and compare it to Quentin Tarantino "Pulp Fiction" of thirty years earlier, you will see a lot of similarities.  Tarantino's film made him a household name, while this one is forgotten.  That's life in the city of dreams.  Here, we have two wisecracking hit men arguing over who is going to finish their steak while dressed in tailored suits, a gangster's moll flirting with a hood, the heavy emphasis on cars, the funky hep-cat music - sure, these are conventions of the genre, but I had not seen this film in decades and when I recently did, the similarities just leaped off the screen. 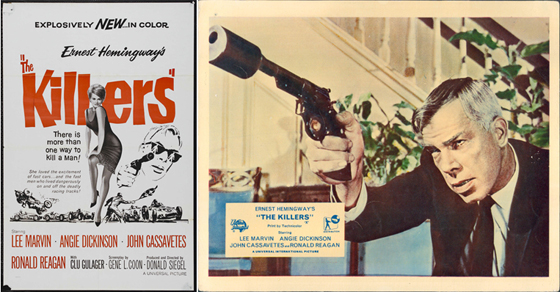 Anyway, regardless of any connection, it is that kind of film. Two squabbling hit men are hired to make a hit and then decide go to into business for themselves. The film is mostly told in flashbacks as the hit men, acting as investigators, slowly piece together the reasons underlying their initial hit, or more accurately, why their target didn't try to avoid being killed.


"The Killers" is a terrific, iconic film with one of the best casts of its time. Some may think the cheesy sets resemble old "Dragnet" reruns in places, but that actually is part of its charm. Having minimalist sets forces you to focus on the acting, and there is some terrific acting going on.


Clu Gulager just dazzles as the wired side-kick. Gulager never made it big, and was a favorite guest star on TV series in the '70s invariably playing the heavy, but here he is vibrant and edgy as Lee Marvin's controlled but half-psycho sidekick. Marvin is the perfect hit-man, never wasting a word, thinking ahead and planning his moves like an army general. Angie Dickinson, well, I think this is her best role, appearing fresh-faced and dewy as Ronald Reagan's gangster moll. John Cassavetes as the fulcrum on which the plot turns manages to play a "patsy," a very meaningful word in that era, and plays it well. And Reagan, well, he plays a terrific, menacing heavy, who, with a quick look at the end toward some cash in his hand, gives a little moral lesson that shows some real depth in his character.


This is full of classic Hollywood tricks that just work.  Lee Marvin staggers out of his car at the end after having been shot - and blood drips on his shoes. The last five minutes of the film, in fact, are just spooky they are so good in a totally understated way. The violence throughout is breathtaking. Angie Dickinson gets slugged in the face not once, but twice. People get shot and we only hear, don't see, them fall. Director Don Siegel does more with less at every turn. Not a scene goes on too long, people hit their marks and get the job done without wasting any time. As one of the first, if not the actual first, TV movies (released theatrically instead), it set a standard that few successors have met.

This film was almost a throwback when it was made.  Film noir went out with the '50s, but here it is again, this time in living color.  Norman Fell continues his string of supporting roles in the top films of day.  He must have had some kind of agent.  This played in drive-ins throughout the 1960s. 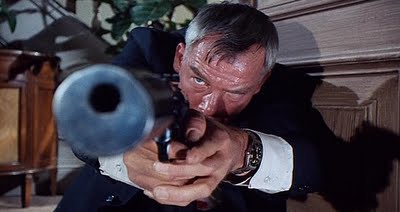 Make no mistake, though.  The real star is Lee Marvin.  Some would say that the later "Cat Ballou" was his breakthrough role.  This film, though, has him at his iconic best.


This is a very violent film with a tiny budget, but it becomes an exercise in competent film-making by a crew of real professionals. Highly recommended if you want to see a bunch of icons of the '60s, '70s and '80s give an acting clinic before they really made it big.