Stanley Kramer produced "The Sniper" (1952), and Kramer shows signs of the techniques that he later perfected in his monolithic, impossible-to-criticize blockbusters such as "Judgment at Nuremberg" (1961). Kramer always seemed to want to enlighten the audience as much as entertain us, and "The Sniper" shows that tendency as well. Kramer takes a stab in "The Sniper" at a character study of a deranged serial murderer, so we get a unique perspective on the genre because this was not a standard subject at that time. Unlike other films on the subject, the title character superficially is a good guy, just misunderstood, unappreciated and out of control. Arthur Franz as Eddie Miller capably shows enough nuance in the character of the sniper to keep us from automatically hating him. The point, though, is not to make us like Eddie - just to understand him.


It is a comforting, if unrealistic, notion that even predators are inherently good and just need help and some sympathetic, genial policeman to lead them back onto the proper path.  This notion, which may infuriate some viewers, reflected an underlying liberalism that reached full flower a decade or so later. Along the way, we follow our anti-hero around town as he delivers laundry and get some fabulous shots of vintage 1950s San Francisco. 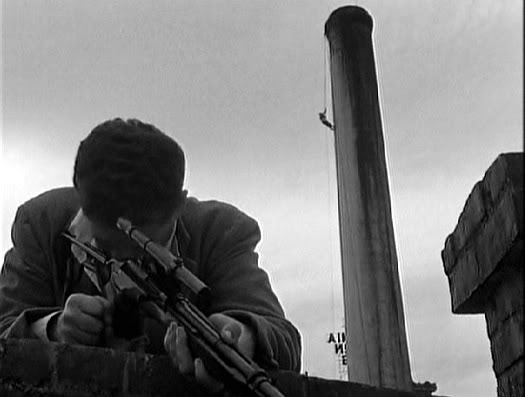 I may be alone in this, but one of the reasons I enjoy old films is that we get an (unintentional) peek at what the world really looked like in the past.  A passing street scene here, a glimpse out a window there - that may have just been a backdrop at the time, but now it can be a lot more interesting than stilted dialog or pulpy plots.


This is an incredibly sophisticated film about mental illness, especially for the early 1950s. Rather than turn this tale of a sniper wholly into a police procedural, as would be the case in then-current "Dragnet" or the now-popular "CSI" string of shows (funny how some things don't change), screenwriter Harry Brown and director Edward Dmytryk ("The Caine Mutiny") focus on the sniper himself. Which is a risky, but brilliant, decision. It also is not a pro-criminal film, trying to show that Eddie is justified in what he is doing - instead, he is portrayed as a menace who must be stopped at all costs.


So, without giving anything away, there is a sniper (obviously) who is on the loose in San Francisco. He is a tortured soul, driving around town in his menial job sizing up potential victims.  He regrets what he is doing but finds himself unable to stop. He even leaves notes for the police begging them to stop him (as in the real-life 1945 Frances Brown murder in Chicago) and is amazed at how far he can go and how seemingly obvious he can be without getting caught. Little vignettes are given throughout the film that reveal his obsessive compulsion, and a solid attempt is made to illustrate possible reasons, though they are never completely spelled out. In essence, he is a forgotten and constantly demeaned man who has found a violent outlet, but there is much more to him than that. In this way, it goes far beyond many other films in the genre, such as Boris Karloff's 1968 "Targets," which makes no attempt to explain what motivates the sniper in that film, or even "Dirty Harry," with its crazed sniper who is portrayed babbling incoherently.


The story also shows the efforts by the police to identify the sniper and the pressures on them to do it quickly, but it does so in a knowing and almost humorous way. For instance, with absolutely nothing to go on, they decide to call in a parade of perverts for questioning just for the sake of showing they are doing something. This is quite an amazing scene, not because it is so funny (which it is), but because any successful humor in a film about a serial killer is incredibly difficult to pull off. But the scene also serves a purpose and actually says a lot about real police work.


The ending, and the somewhat over-used device of having a psychological profiler explain what is happening while the killer is at large, clearly foreshadows elements of Hitchock's "Psycho," a film this one resembles in several respects. And that is fast company.


Arthur Franz is perfect in the title role. His own life story is fascinating, having been shot down over Rumania, incarcerated as a POW, then managing to escape. After the war, he entered acting (a pre-war interest), and developed a long career as a character actor in B-movies. This was his big break, a leading role in a major production playing a complicated character.  It was an opportunity that unfortunately would not be repeated. He does a good job, but seems a bit stiff and uncertain about what he is doing. The overwhelming feeling that you get while watching his performance is that he is uncomfortable. That may not have helped his career, but gives this film a creepy feel that adds an extra dimension to the production.


Gerald Mohr nails the role of a "Joe Friday" detective who expresses the impossibility of finding a killer when there is no evidence to go on.  By being a good policeman and doing his job, though, eventually he manages to find the vital clue.


The beautiful Marie Windsor is excellent at illustrating what about the sniper's victims is tormenting him and sent him over the edge. She is incredibly flirtatious and then just as suddenly dismissive, just like a real woman, but this triggers something uncontrollable inside Franz's character.  He does not like being toyed with, and the results are horrible.  Windsor was quite a talent. Later, a scene involving a water tower is the terrific climax of the film, and director Dmytryk and Franz make that work brilliantly.


You won't forget the final shot of Franz for a long time. I recommend this largely forgotten film for those interested in a trip to the seamy underside of the 1950s.