The Girl In Black Stockings (1957) - Murder on the Utah Express


"The Girl in Black Stockings" (1957) is an engaging little who-done-it set at a Utah motor lodge in the late 1950s. We have a dead body (apparently, the party girl of the title was wearing black stockings, or was strangled with a black stocking - I couldn't figure out any other reason for the title, aside from an off-hand quote later by one of the characters), and an eclectic cast of mid-1950s suspects. There's the brassy Hollywood couple, the quadriplegic lodge owner and his sister who cares for him, a visiting LA attorney and his girlfriend, and some locals. 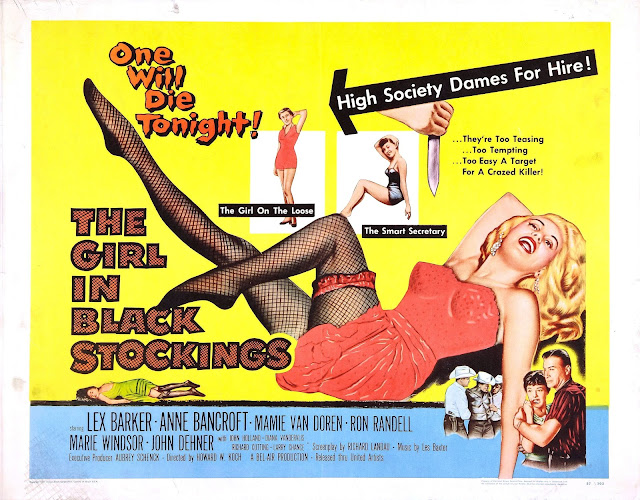 It is all played out in trashy fashion, almost like a soap opera as the film meanders to its downbeat ending. 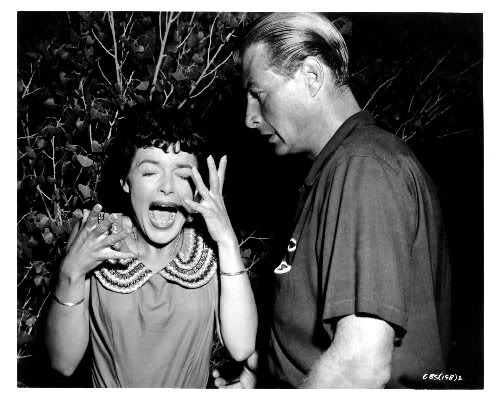 You should see this film for the atmosphere, not the mystery. The resolution isn't all that interesting, it's the ride there that you likely will enjoy. While there are some famous actresses emoting all over the screen, the real stars of the show to me were the late-1950s cars. What a fine collection of soaring tail fins! If you had those cars now in the condition they are in this film, you'd be a millionaire for sure, and have a classy ride every day to boot. 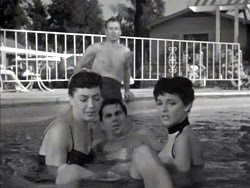 Ron Randell steals the show as the paralyzed lodge owner, gritting his teeth every chance he gets and being as annoying as he can manage while being quite open about his hatred for women. Quite an enjoyable performance. Half the men, in fact, seem to hate women, which is odd in a film that has such beauties as Mamie Van Doren, Anne Bancroft and Marie Windsor. Or maybe that's why they hate women, because they are tempted by women they can't have. Who knows. Anyway, this is above all a story of male-female relationships and the perils of same. The serial killer is almost an after-thought.

There is lots of eye candy here, and plenty of chances for the actors to chew the scenery.  The real treat is a glimpse at the 1950s mindset, with provocative dames, sleazy men and suspicious types all around.


Marie Windsor is superb. The hint - well, it's more than a hint - of the attraction between her and her brother is more than a bit jarring, but she pulls off her rather sketchy role with aplomb. John Dehner as the Sheriff (his standard role) is the real star of the proceedings, but with so much talent around to chew the scenery, everybody gets their share of moments. Dan Blocker of all people slips in a fine supporting bit as a sleazy bartender. All I can really say about that is that it's a shame, considering his later career, that he doesn't appear in the scene set at the Ponderosa Pine Company.


Take a ride in this tailfin car, you'll enjoy every moment.