"The Time Travelers" (1964),  directed and written by Ib Melchior, is one of those underground science fiction staples that some of us remember long after many of its more respected peers have been forgotten. I first saw it (in black and white) in the late 60's or early '70s and found it creepy but imaginative. It imagines a remarkably dark view of the future and the effect of technology, which was completely at variance with the general mood of those space-age times. In a sense... wait for it... it was ahead of its time (groan).


Now, watching it in bright color and with thirty years of perspective, I still have a strong reaction. As always seems to be the case with futuristic stories, the film rather transparently comments on current society by stepping outside it. A bunch of oblivious, accidentally time-traveling scientists suddenly find themselves marooned in a deadly post-apocalyptic Hell where they quickly have to figure out a way either to get back home or find a more congenial environment. Sounds like your standard Twilight Zone episode, right? Well, that is fast company, and this film manages to hold its own.


No pretense is made about the time travel being historic or whatnot. No "One small step" speeches or the like. One of the scientists mutters darkly, "I'm gonna open up the laser cycling all the way," to which everyone else is like, "No, no!" and you know you're off to the races! Then our intrepid band blithely wanders from one outrageous situation to the next as though it were an unplanned trip to the mall. When their way home disappears, they stand around with blank expressions as though they simply lost their car keys. Then, there is something to wake them up: a roaming band of mutants attacks. Their solution? Well, run down a ravine and throw rocks at them, of course!


Things then start to perk up. They meet freaky underground survivors who basically shoot anything that moves on the surface, so what do our heroes decide to do? Well, what the heck, make out with the locals! I've made shopping trips to the mall with more seriousness of purpose than these folks display about going from a comfortable lab in Ivy League America to a radioactive Hades that looks suspiciously like the place where Kirk fought the Gorn.


So, as noted, the time travel gimmick is being used to comment on something else. What? Well, first, the film is fairly unsubtle in the way it sets up the differences between The Past and The Future. The sets are divided between stodgy old 1950s decor, where the scientists begin, and the mod, swinging 1960s future-chic, complete with girls in the requisite skin-tight outfits and with ubiquitous monitors showing views of Saturn and the like. Not a hard choice which is more fun, right? The problem, though, is that the swinging future, while colorful, turns out not to be such a great place after all. Instead, it turns out to be just another downward step in a deadly spiral that, ironically, the stranded scientists themselves helped create.


So what is the answer for our travelers? Well, break the cycle, or as Susan Powter would say, "Stop the Madness!" How our heroes do that at the end, and wind up making love, not war, is one of the more original climaxes to a time-travel fantasy. Their way out represents a deeply cynical (and, in retrospect, fairly sophisticated) commentary on the futility of the way things were going in society when the film was made. The suggestion is that the social changes just starting to take place then, which certainly made for social progress in some ways, were in actuality not coming close to solving the real problems of the world and, in fact, were only creating bigger problems.


In subtle ways involving one of the future characters, the film suggests that science alone is not helping with problems of prejudice and small-mindedness. Presumably, this is because people in the scientists' (our) time wrongheadedly (like our heroes) spent all their time focusing on creating better machines and not on understanding people and their problems. The film can be interpreted as presenting deep suspicion about technology and the lack of thought as to how it should be integrated into society. There is a recurrent theme of fear about the sinister uses of technology and its limitations. The symbolic flaming androids at the end make a particularly lasting impression.


Highlights of the film are comic Steve Franken "making eyes" at gorgeous Playmate Delores Wells and Dennis Patrick playing a jealous heavy. The crazy futuristic disco is a hoot. Some of the shots in the desert with what appear to be hand-held cameras are nicely done and ahead of their time. Nice way to make a virtue out of the tiny budget. ;) Certain time-travel paradoxes are dealt with in a very sophisticated manner. The giant view-screens may have influenced the "Star Trek" starship look. All sorts of creativity is thrown up on the screen along with the humor and local color. In fact, Ib Melchior actually uses magic tricks - actual magic tricks out of the magician's handbook - to create the illusion of advanced science (such as the decapitation illusion).


Apparently, this film was the impetus to getting the TV series "The Time Tunnel" made.  It also supposedly encouraged the making of a bigger-budget remake a few years later.  That's quite a lot of influence for a forgotten film. 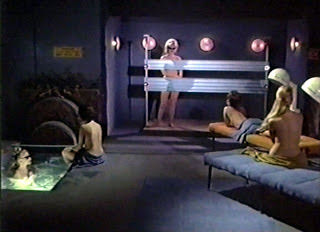 One of the great things about this film is the fact that it shows a lighter side to the future. It isn't all machines and androids and rockets. We get a peek at sunbathing of the future, for instance. And, friend, it is fine, just fine. 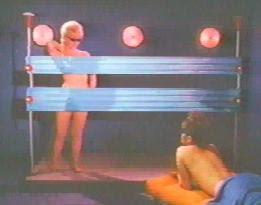 There also is a glimpse of fashions to come. Apparently, they will show the female figure off to its best advantage in the future. 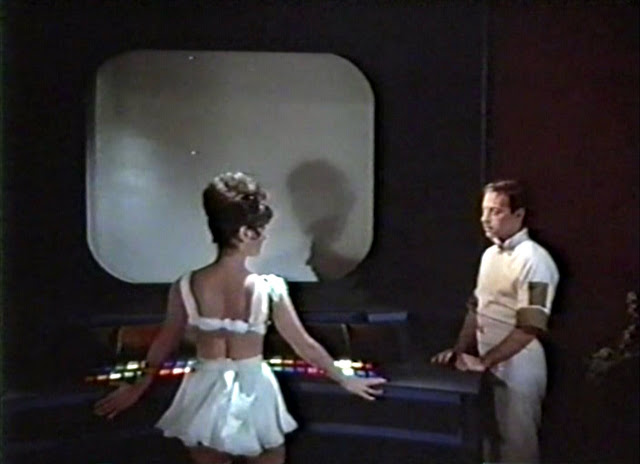 "The Time Travelers" is in the public domain, and you can sometimes find complete copies on Youtube. Director Ib Melchior, who previously crafted the fabulously inventive Angry Red Planet, hits an under-appreciated home run with "The Time Travelers."


The score of "The Time Travelers" is surprisingly good for a low-budget sci-fi outing. Definitely worth a listen if you like that creepy, on-edge thing.