The first installment, "Harry Potter and the Philosopher's Stone," introduced all of the main characters. It did not quite get to establishing the wizard triumvirate of Daniel Radcliffe, Emma Watson and Rupert Grint as the foundation of everything. "Harry Potter and the Chamber of Secrets" does that definitively.


In brief, Harry Potter (Radcliffe) ignores warnings not to return to Hogwarts. When he does get there, he finds the school plagued by a series of mysterious attacks. In addition, there is a strange voice haunting him. "Harry Potter and the Chamber of Secrets" shows how Harry Potter handles the situation with his friends, Hermione Granger (Watson) and Ron Weasley (Grint).


Let's back up a step. Forced to spend his summer holidays with his un-cool relations, Harry Potter is shocked when he gets a surprise visitor: Dobby the house-elf (voiced by Toby Jones). Dobby warns Harry Potter against returning to Hogwarts because terrible things are about to happen there. However, Harry is determined to return and continue his education as a wizard.


Harry ignores Dobby's warning and continues with his scheduled return. He finds that strange and terrible things indeed are happening at Hogwarts. He hears mysterious voices from inside the walls, muggle-born students are attacked, and a message scrawled on the wall in blood puts everyone on their guard - "The Chamber Of Secrets Has Been Opened. Enemies Of The Heir, Beware." Nobody knows what this means, so it is time to do a little investigating. Things proceed to their logical conclusion from there.


The kids are a bit older, though they still are kids. Their acting is somewhat improved, though not much. The Harry Potter film progression obviously is a learning process for everyone, both behind and in front of the camera. Rather than just being cute kids dressed up, in "Harry Potter and the Chamber of Secrets" they actually carry their scenes rather than just inhabit them, which is a vast improvement over the first film.


There are the usual colorful scenes in "Harry Potter and the Chamber of Secrets," and lots of Halloween imagery as in the first film. You pretty much know what you are getting when you enter a Potter movie, as you do when you go to McDonalds. The surprises are few, the machine just runs smoother. The cast is virtually unchanged with Richard Harris, Robbie Coltrane, Julie Walters and Alan Rickman doing their usual bits. Tom Felton is good as a classmate of Harry Potter who challenges him to duel. Note for the future - challenging the star of the series to a duel is usually not a wise choice.


So, "Harry Potter and the Chamber of Secrets" is a great film for fans of the franchise. You must see it if you have read the J.K. Rowling books because it is a "faithful adaptation" by screenwriter Steve Kloves. "Harry Potter and the Chamber of Secrets" did not get nominated for any Academy Awards through some oversight, but the effects and cinematography are top-notch. This film I can recommend for its quality, not just its hype. 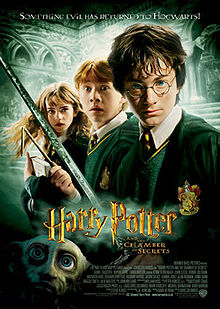