Harry Potter and the Philosopher's Stone (2001) - Start of the Phenomenon

I wrote this review of "Harry Potter and the Philosopher's Stone " (2001) (original title "Harry Potter and the Sorcerer's Stone") in large part in 2001, upon the release of the film. I have cleaned up the language a bit and made a few stylistic changes, but it represents my thinking at that time. So, if in places it appears to miss something obvious now, well, it wasn't obvious when I wrote it and I did not have the benefit of a decade of hype and news. So, here goes.

"Harry Potter and the Philosopher's Stone," directed by Chris Columbus, is the film that began the franchise of all movie/book franchises. You don't get more popular than the "Harry Potter" saga. Money talks, and Harry Potter became big business in Hollywood as it glommed onto the J.K. Rowling fan base.


If you say bad things about "Harry Potter and the Philosopher's Stone," there will be retribution. People will hate you and treat you like a leper. You must like "Harry Potter and the Philosopher's Stone." It is the McDonalds of movies, it is assured to outlive us all from mass consumption. My opinion, your opinion, anyone's opinion is irrelevant. The masses love it, and it shall endure. End of story. 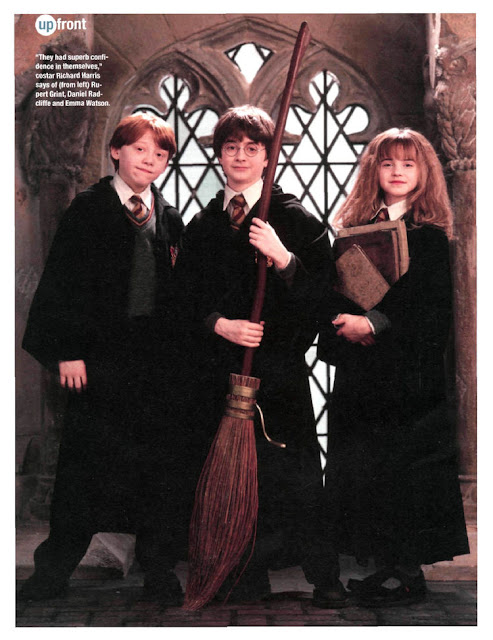 The phenomenon around Harry Potter was interesting. Everyone was waiting for the release of this film with bated breath - at least everyone I knew under the age of 12, a handful of kids. It was odd to see children so programmed to want to see a film, as if they had been mesmerized by a wizard themselves, so that aroused my curiosity and interest. So, off we went. What was not particularly interesting was the film itself, "Harry Potter and the Philosopher's Stone." I found it derivative and unoriginal. Every Halloween cliché and image, from magic wands to flying broomsticks to trolls to centaurs, is dragged out of the closet one more time with barely any originality whatsoever. "Harry Potter and the Philosopher's Stone" is fantasy fulfillment for the pre-teen and teen set, and as such has a certain value. As art, though, it falls short. Way short.


Make no mistake, the film is lush. Everything is filmed in soft tones, the settings are lavish, and the director throws in magic tricks and CGI at regular intervals to keep the whole thing from looking, you know, normal or something. The acting, though, is the greatest weakness of "Harry Potter and the Philosopher's Stone." The child stars - the three leads are Daniel Radcliffe, Emma Watson and Rupert Grint - clearly were picked for their looks and not any particular acting finesse. They were learning on the job, and it showed. The child - and I use that term advisedly - they picked to play Potter himself, Daniel Radcliffe - to the accompaniment of international hype - has all the makings of another Mark Hamill. That is, enduring celebrity for this one role as Harry Potter, while unlikely to move forward to anything else.  Good luck with that! Radcliffe no doubt will become a legend among Potter groupies, is set for life, and will do the inevitable boatload of sequels, but shows no particular promise outside this particular role. His primary acting talent is to give a big toothy grin whenever his enemies are tormented or he triumphs at something or other (which happens with monotonous regularity). In between triumphs, Radcliffe generally just looks blank, which is a welcome break from his mugging when everyone inexplicably expresses how wonderful he is.


The most striking thing about the other actors is how their talents are utterly squandered. Most striking is John Cleese, who floats in as a ghost and is given absolutely nothing of interest to say. Perhaps they are setting his character up for the sequels. However, since I'm reviewing this film, not them, why he is present at all is a mystery. Alan Rickman and Robbie Coltrane are the only actors that make any impact, though John Hurt is fine in a cameo. "Harry Potter and the Philosopher's Stone" badly needed strong contributions from the likes of John Cleese, Richard Harris and the rest, but the script hamstrings them and instead dwells on the kids. It's too bad, because a film about the adults in this make-believe world would have been an artistic, if not financial, success.


Technically, "Harry Potter and the Philosopher's Stone" falls flat in a number of areas. Most annoying is the background score, which loudly intrudes at every possible instance. Harry walks down a path - and the music wells. The editing is a horror, as scenes that could have been riveting, such as the chess match toward the end, are butchered. If you are going to base the outcome of the tale on a chess match, at least show a little bit of the game! The film's makers clearly look down on their audience as people either incapable or uninterested in understanding a chess match. Instead, they substitute neutered violence by the chess pieces when they capture each other. There was no drama, just more chances for Harry and his crew to look around blankly yet again and await the inevitable triumph. The end of the film, when Potter's school rivals are emotionally crushed, was unintentionally depressing to this viewer. Can't Potter succeed without his lessers being humiliated? Not in "Harry Potter and the Philosopher's Stone."


The affected upper-class British accents make a number of the characters, particularly Harry's friend Hermione, appear unsympathetic and ridiculous at times. Expecting a 13-year-old to play a know-it-all and still remain likeable was way too much of a chore for this particular proto-actress. The entire film has a certain voyeuristic flair to it, dwelling on images of sumptuous banquets and manor halls and the like. There is great possibility for satire here, but the film misses its chances and plays it straight. I'm sure a host of comedians are salivating at the prospect and won't waste the opportunity.


A bit of inventiveness might have saved "Harry Potter and the Philosopher's Stone," but that is sorely lacking. There is little original about this "Bedknobs and Broomsticks" type of tale. The hyped ball game in the middle of the film (Quidditch or some such) makes little sense, as Harry (of course) saves the day by singlehandedly catching a butterfly or something after half his team has been wiped out, thus nullifying the efforts of everyone else involved. Why, all our little hero has to do is make an effort, and he magically wins a game he was losing. Ultimately, the film is a fantasy about exciting times at boarding school, with these "magical" students going back to their homes at the end, which makes no sense at all. Harry saves the world, but what really matters is that he shows that his crew is superior to his school competitors. This sort of "For me to win you must fail" ending seems in vogue right now, in films like "Legally Blonde," and is far from attractive.


Scenes and motifs are ripped off from much better films, such as "Time Bandits," "Total Recall," "Rollerball" and "The Longest Yard." I recommend any of those films over "Harry Potter and the Philosopher's Stone."


So was there anything redeeming about the "Harry Potter and the Philosopher's Stone"? Absolutely. The three pre-teens I saw the film with loved it, particularly the four-year-old, who now has seen it three times (so far). Hard for something to seem unoriginal when you are that age - which tells you something about the natural audience for "Harry Potter and the Philosopher's Stone." Children and undemanding adults will no doubt find the constant stream of tired occult images, magic tricks and colorful characters riveting, but they do not make for high art.


"Harry Potter and the Philosopher's Stone," running at about three hours, will be a great babysitter when it comes out on dvd, the "ET" of its time. If you have kids, you no doubt will wind up owning "Harry Potter and the Philosopher's Stone," and if possible should wait until then to have them see it. Otherwise, try to find someone else to take them to see "Potter" during its theater run. You'll be doing yourself a huge favor. Five stars out of ten for keeping the kids quiet for that long.