Marlon Brando had been kicking around Hollywood for a decade following his early decade of wild success making stinkers like "Burn!" and "Candy." Revisionists can now go back and make the case that these were, in fact, classics, but they sure weren't considered such at the time. After "Mutiny on the Bounty" (1962), Brando seemed to lose interest in making artistic statements and instead just took the paychecks. Talk around town was that Brando was washed up, despite still being only 47 years of age. He began spending more and more time on his remote Tahitian island, obsessed with his crazy scheme to turn it into a tourist destination (which may, long after his death, finally be happening).


Then, something unpredictable happened. All of the top leading men in filmdom were considered for the lead role of Don Corleone in Mario Puzo's best-selling story about New York mobsters called "The Godfather" (1972). That included Laurence Olivier, Orson Welles, and Frank Sinatra. Director Francis Ford Coppola, however, seemed crazy when he insisted on somebody nobody else had thought of: Marlon Brando.


Paramount relented and made Brando an insulting offer of mere union scale. He held out for a better deal, and Executive Producer Robert Evans ultimately (and very wisely) gave him a little more money (Brando needed the money to pay off one of his wives). It was not at all commensurate with Brando's stature within the film industry. He was so upset afterwards about this shabby treatment that he refused to do any publicity for the film. He made out wonderfully in the end, though, earning huge paychecks later in the decade due to the accolades he received for this performance.


Brando's refusal to give interviews didn't matter. The film was a huge hit and spawned a sequel, "The Godfather: Part II" that was as good as the original.  Brando was back, and by decade's end he was raking in the biggest salaries in history for glorified cameos in "Apocalypse Now" and "Superman." While many already considered Brando the top actor of his generation, "The Godfather" made him a legend.


One of the fascinating little-known facts about the film is that, before the film's success, the subject matter was considered offensive to many people.  A request to film scenes in the Long Island town of Manhasset was turned down by the local residents, who were not willing to give up their peace and quiet just to host some sleazy gangster flick. There also may have been an undercurrent of feeling that the film was anti-Italian. A less picky neighborhood in Staten Island finally agreed.


The film is chock full of classic lines and scenes.  "I'll make him an offer he can't refuse" entered the lexicon, along with "Try the veal" and .  The scene where a Hollywood big shot (John Marley) is coerced by the mob into doing what it wants (he wakes up next to a horse's head) also became a catchphrase for intimidation. Brando's muffled voice, achieved by using a special prosthesis in his mouth, became the signature of the entire film. Everybody knew what "kissing the ring" meant after this film.


The film was a turning point in just about everybody's career: Al Pacino, Brando, Coppola, Robert Duvall, James Caan, all either saved their careers or got a huge boost out of if. Diane Keaton also made a name for herself as one of the very few females characters in the film.


The plot is almost beside the point. The story follows Don Corleone as he leads his crime family and does what crime bosses do. It's all about "respect," who gives it and who gets it. And those who don't give it, get it in the end, the hard way. The viewer is left in suspense until the final scenes as to whether the Don can fend off his rivals and maintain power. It is a time of change in the crime world, and he wants to pass all of his power on to the next generation.


This film is the epitome of Hollywood for many Italian-American actors, and many others as well. From the script, to the score (Nino Rota), to the acting, everything is pitch-perfect.


There are some who claim that the sequel is a better film.  I don't see that at all.  At best, it equals this film and is a worthy continuation of it. "The Godfather," though, introduced the music, the structure, and the characters of the second film. This was the brilliant breakthrough, not the sequel, which did boast an iconic performance by Al Pacino. Brando (wisely) did not appear in the sequel despite having the opportunity to do so, so it is lesser simply because of that.


A must see for any film fan. On almost every good "Top Ten" list and mine as well. Below is the original trailer. 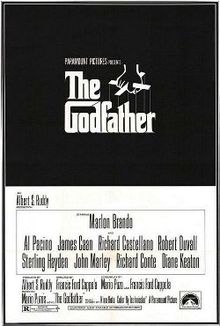