Body of Evidence: Madonna Determined to Show how Bad She Can Be


Madonna has a longer list of film credentials than many Hollywood stars who don't also have singing as their main career, and her projects range from classy ("Evita" and "A League of their Own") to sleazy ("Swept Away"). "Body of Evidence" (1993), directed by Uli Edel from a script by Brad Mirman, is one of her sleaziest outings. The fact that Madonna can bounce back from these types of disasters shows how much talent she has as a singer. A Dino De Laurentiis erotic thriller of the type usually shown on Cinemax, "Body of Evidence" apparently was designed to capitalize on the notoriety of the previous year's "Basic Instinct." The issue of "rough sex" also was very topical at the time because of some high-profile murder cases.


An older man, Andrew Marsh (Michael Forest), is into kinky sex that he tapes for for his own later amusement. After he is found dead from asphyxiation during a sexual encounter, the main suspect is Rebecca Carlson (Madonna). Carlson appears in some of Marsh's films and stands to inherit $8 million dollars that he left her in his will. Charged with First Degree Murder, Carlson hires lawyer Frank Dulaney (Willem Dafoe) to defend her. The two quickly embark on a sexual relationship that has eerie similarities to the one between Marsh and Carlson. During their first sexual encounter, Carlson ties Dulaney's hands, then pours hot candle wax all over him before taking control of him sexually.

Carlson loudly proclaims her innocence in court, but District Attorney Robert Garrett (Joe Mantegna) is out to convict her. The case is complicated by testimony from Marsh's assistant, Joanne Braslow (Anne Archer), that she also had sex with him. Meanwhile, Dulaney begins to suspect that Carlson isn't telling him everything, and that he will withdraw from the case unless she comes clean. Carlson retaliates by calling Dulaney's wife (Julianne Moore), who accuses him of cheating on her and points out various "lovemarks" left by Carlson on his body. Dulaney then confronts Carlson, who entices him into having rough sex. This time, though, he restrains her and she is helpless.


In court the next day, Garrett shows that Carlson has a habit of dating older men and having rough sex with them, including Jeffery Roston (Frank Langella). Carlson, though, testifies on her own behalf and wins over the jury, earning an acquittal. As she leaves the courtroom, Carlson thanks Dulaney for winning the case despite the fact that she was guilty.

Visiting Carlson's house that night, Dulaney overhears her talking with Marsh's doctor, Alan Payley (Jurgen Prochnow), about how they killed Marsh. Carlson knows she can't be tried again for the murder, but she dismisses Payley in humiliating fashion because he remains in jeopardy. Carlson makes a point of rubbing it in by telling how easy it is for her to make men do whatever she wants. Payley, enraged, pulls out a gun and shoots Carlson.


Madonna, who already had a sexy image from her "Like a Virgin" days, appeared to be trying to deepen it with her "Sex" coffee table book and this film, both released in 1993. She appeared nude in both, though her most explicit scenes in "Body of Evidence" were only released to home video. Madonna also was in the process of releasing music videos around this time with an increasingly sophomoric sexual edge, such as "Vogue" and "Bad Girl." While using her attractiveness to sell more music, she at the same time seemed to poke fun at the whole idea of sexualized imagery in modern culture, giving her products a slightly comical with their brash sexual posturing.


There are several explicit sexual scenes that portray various sexual acts in "Body of Evidence." If you are a fan of Madonna that may be reason enough to see "Body of Evidence." However, throughout the film, you get the impression that Madonna is playing herself, not some character, and she seems to be almost desperately trying to prove how "bad" she can be. The script is terrible, with the awkward ending only the capper for a screenplay full of stereotyped, demeaning roles (the respected Langella's appearance remains a mystery) and obvious plot points that play out a dreary scenario that is obvious throughout. Dafoe is a great character actor, but he is not ideally suited as a romantic leading man in this kind of twisted, turgid drama. Little-known Director Edel filled a niche at the time of filming dark, sexually frank dramas like this one. Since "Body of Evidence," which did his career no favors, he mainly has worked on television mini-series and domestic German films.

There also is a famous scene in which Julianne Moore slaps Madonna. Or... well, let's let Moore tell that story:


It was a fake slap, but she wasn't talking to me because she was being very method-y. I felt nervous and scared. I didn't want to hit her at all.

For a lot of viewers, that scene was pure wish fulfillment, but why opens up a whole other can of worms. So, let's just say it is a memorable scene in "Body of Evidence." 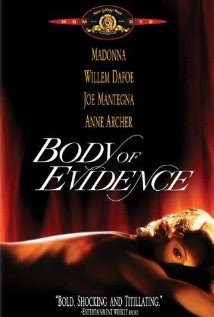