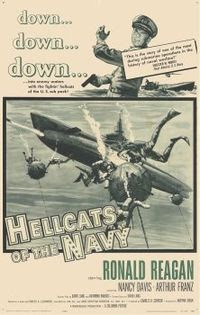 "Hellcats of the Navy" (1957), directed by Nathan Juran, is a little oddity because it features the future US President, Ronald Reagan, and wife Nancy Davis. This is a classic B-movie of the kind that disappeared shortly thereafter (though the term is still applied to unpretentious films). "Hellcats of the Navy" thus is more important as a historical curiosity than entertainment, but for that reason alone is watchable if you are in the mood.

Ronnie is Cmdr. Casey Abbott, a US Naval officer in charge of a submarine entrusted with a mission to chart a key minefield in a strait leading to a Japanese strong point. Arthur Franz ("The Sniper") is Lt. Cmdr. Don Landon, second in command, and Nancy Davis is Nurse Lt. Helen Blair who is Ronnie's flame back at the base. One of the sailors on the sub also is interested in Nancy, though very little is shown of that. The film depicts the sub's mission and how everything is resolved. 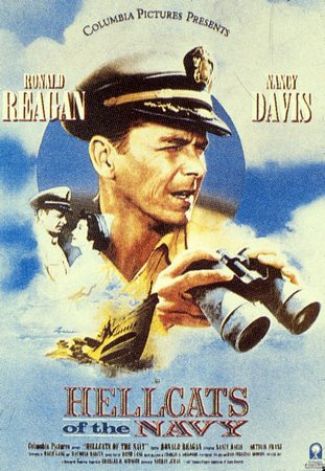 Fleet Admiral Chester Nimitz, who basically ran the overall sea and land war against Japan in the central Pacific as well as being the direct Commander of all US Naval forces there, makes a few brief introductory remarks in full uniform about how important the submarine force was in defeating Japan. It's odd to see such an important historical figure in a film which is barely a step above a TV movie, but he lends an air of prestige that serves the film well. Perhaps he was a friend of Ronnie (who did a lot of wartime films for the government) and wanted to do him a favor, or was just very interested in reasonably realistic sub movies (he spent a lot of time in them during his youth). 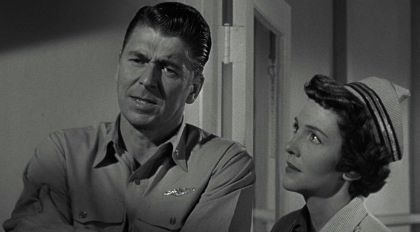 The plot is formulaic and hokey, and no better than most TV episodes of "Voyage to the Bottom of the Sea" or "Sea Hunt." Captain Ronnie has to abandon his rival for Nancy's affections at sea "to save his men," much to Landon's dismay, and then Landon later has to make an identical decision about Ronnie himself. Ah, the burden of command. There are numerous shots of the sub surfacing and diving, and of naval frogmen of the era, which may interest you if you are into classic naval ordnance. Pretty much every cliché from sub movies makes it in at some point ("Someday, you will have your own command and have to make tough decisions, too"), close-ups of the sonar guy's face as he tracks a Japanese ship above, etc. 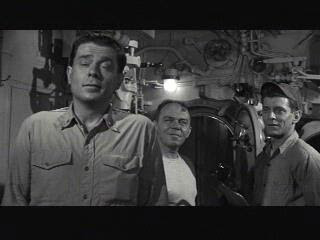 Oddly, there is really only one scene of any significance between Ron and Nancy, and it is as stiff as humanly possible. Not only do they barely look at each other, they hardly touch at all. It's hard to detect any warmth between them. There is more warmth shown between the Reagan and Franz characters, that male bonding thing being another cliché of sub movies. Reagan did much, much better work, as in the later "The Killers," but does a competent job as the approachable but rather grim commander. I don't find Nancy either attractive or interesting in this film, but she and Ronnie do look like a middle-aged couple that might get together in reality and not just in the fantasy world of the movies. 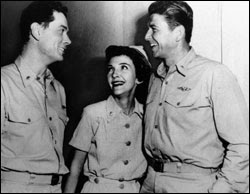 Worth viewing simply to see how Ron and Nancy interacted on screen. I have to think - well, hope, anyway - that they were more affectionate in real life. They sure don't show much here.