Greta Garbo Will Dazzle You 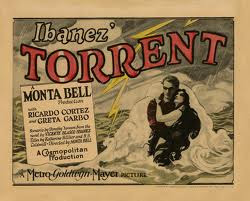 "Torrent" (1926), directed by Monta Bell for MGM, was quite a surprise to this casual viewer of silent films. I wasn't expecting much, to be honest. Greta Garbo's first Hollywood film? So what? Probably something rough and with the usual exaggerated arm-waving and facial contortions that low-grade silent films so often show.


Well, was I mistaken. Greta Garbo must have just shocked the studio people as much as she did me, because this film based on the Vicente Ibanez novel about tragic romance made her a star, and deservedly so. She instinctively understood the power of just standing still, or of simply holding a meaningful expression for a long, lingering moment so its effect could be felt and not just seen. I kept thinking to myself, how did this modern actress get into a creaky silent film? She was just years and years ahead of her time.


The story isn't all that interesting, it is the usual tale of love found and lost. It is only the performance of  Greta Garbo as Leonora, the poor village girl who makes good in the big city and then returns to get the man who got away, that gives it life. Co-star Ricardo Cortez is serviceable, but his character is never really developed and he is demeaned by the script throughout. At one point he is made to wear Greta Garbo's clothes (which must have been considered quite demeaning in 1926), leave in a huff, then ignominiously return and give them back. And let's not even talk about Ricardo Cortez' horrible final scenes with Garbo and then his wife. Way too ordinary and almost puerile, Cortez didn't have much of a career after this and one can understand why. But Ricardo Cortez suffices as the somewhat mystifying object of Leonora's obsession. She has to want something life... right?


There is one utterly fantastic line in this film that just says it all. "Leonora, you are becoming conspicuous." Yes, conspicuous indeed.


If you really want to know what it's all about without seeing the whole film, just watch the last 30 seconds or so - Garbo's glance as she sits quite alone in her luxurious car says everything. "She must be so happy, she has everything she wants" - yes, Garbo's face says it all about that. I have to see this one again, Garbo is just amazing.

Below are some clips from the film, which is in terrific condition.