"True Grit" (1969), directed by Henry Hathaway and based on a script by Marguerite Roberts and a novel by Charles Portis, is a simple but involving Western tale. That simplicity, but emotional complexity, is the root of its charm. It possesses an innocence that has become incredibly rare. Combine that with career performances by virtually everybody in the cast, and you have one of the great John Wayne films.


Kim Darby is Mattie Ross, a precocious early teenager of means who is out to avenge the senseless murder of her father by one Tom Chaney (Jeff Corey). Given a list of Federal Marshals to enter an Indian Reservation and capture Chaney, she chooses the one described as the "meanest" who has "true grit." That is one Rooster J. Cogburn, played by John Wayne at his absolute hammiest. Now, "hammy" is not a word often used to describe Wayne, but here it is the best I can come up with. 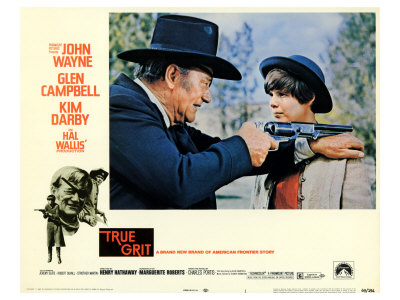 Just the faces he makes when talking to somebody he finds amusing, like Mattie's physically unimposing but highly touted lawyer J. Noble Daggett (John Fiedler), are priceless. Or after falling off his horse, dead drunk, and motioning to the ground where he lies: "We camp here." Or shooting a rat with manic glee. Or .... Well, you get the point.

"True Grit" is a throwback. At the time it was made, violent rampages and risqué behavior were taking over Westerns such as "The Wild Bunch." Here, though, nobody so much as says a bad word. Everybody, particularly Mattie, speaks in complete sentences, with the kind of formal phrasing that one imagines people in the 1800s actually might have used. The tale is simple and straightforward, one that might actually have taken place in the real world. All of these touches very much appeal to me.


But it is more of a throwback than that. There is an air of chivalry that pervades the film. The worst that is done to Mattie, who with her curt manner constantly annoys everybody (such as Strother Martin in an awesome turn), is ... a spanking. And even that is stopped by Cogburn because La Boeuf (Glen Campbell), the lawman they are riding with and who is administering the beating, is "enjoying it too much." The feared outlaw Ned Pepper, marvelously underplayed by Robert Duvall, treats Mattie with complete respect and clearly intends to return her to her friends after gaining some benefit from her capture. It is all very civilized in a Nineteenth Century way that rings true partly due to the very fact that it is so alien to us.


The climactic battle between Cogburn and the Pepper gang, with the two sides racing toward and then past each other, and then turning for another pass, recalls nothing so much as a medieval joust, or maybe a matador facing a bull. Cogburn has the swagger and exudes the braggadocio of classic heroes of the romantic era. The difference between him and, say, a Don Quijote, is that he backs up his words with deeds (in fact, the climactic battle is strikingly similar to one Cogburn previously had mentioned from his past).


Cogburn and La Boeuf are not just gunfighters at work, but really Knights on a quest, helping a somewhat prosaic fair maiden achieve justice. One can see the same themes in Clint Eastwood's much later "Unforgiven," which borrows a lot from this film (particularly the hero as deeply flawed but ultimately good-hearted).


And as for the sentimental part, Mattie (calling her Dulcinea would have been too obvious), for whom Cogburn performs his Knightly services, rewards him with little more than her good favor (well, there is money involved, too, but that is simply contractual and hardly the real payoff). There is no hint of anything illicit or improper. There is simply a noble offer to reward Cogburn by means of a purely sentimental gesture. One which you can see unexpectedly touches gruff old Cogburn. And he makes a simple but grand gesture in return. Old-fashioned gestures of respect. A dip of the lance.


Glen Campbell took some heat at the time for his somewhat wooden acting, but, looked at retrospectively, he does just fine. He didn't have a lot of acting experience, and did not go much further into films at all, but he is affable, and Wayne plays off of him nicely. He really does embody a sort of earthy American spirit. Here are some lines from the script:


[Rooster and LaBoeuf are on the ferry; Mattie comes over to get on board]
LaBoeuf: You're not gettin' on this ferry.
Mattie Ross: This is open to the public. I paid my ten cents for horse and rider.
LaBoeuf: Red, take this girl into town to the sheriff. She's a runaway. There's also a $50 reward.
Mattie Ross: That's a big story!
LaBoeuf: Ask the marshal.
Rooster Cogburn: Oh, she's a runaway, all right. Bound to be paper on her.
Mattie Ross: They're in this story together. Now, I've got business across the river and if you interfere with me you may land up in court which you don't want to be. I've got a good lawyer in J. Noble Daggett.
[Rooster nods to Red; Red pulls her off the ferry]
Rooster Cogburn: [to LaBoeuf] Lawyer Daggett again.
LaBoeuf: She draws him like a gun.


The locations are intense.  Very beautiful indeed, and a nice change from the usual Monument Valley locations. Kim Darby may wear too much eye-liner, and her hair is a bit too perfectly coiffed throughout, but her demeanor and her speech both help you believe in her character.

LaBoeuf: A little earlier I gave some thought to stealin' a kiss from you, although you are very young... and you're unattractive to boot. But now I'm of a mind to give you five or six good licks with my belt.
Mattie Ross: Well, one would be as unpleasant as the other.

Some of the shooting was done in Colorado, and great pains were taken to set up scenic shots. Mattie could use her big ol' pistol in the yard below:

Rooster Cogburn: Why, by God, girl, that's a Colt's Dragoon! You're no bigger than a corn nubbin, what're you doing with all this pistol?
Mattie Ross: It belonged to my father, he carried it bravely in the war, and I intend to kill Tom Chaney with it if the law fails to do so.
Rooster Cogburn: Well, this'll sure get the job done if you can find a fence post to rest it on while you take aim.

Strother Martin is fabulous in his quick bit as a horse dealer.

Mattie Ross: Do you know a Marshal Rooster Cogburn?
Col. G. Stonehill: Most people around here have heard of Rooster Cogburn and some people live to regret it. I would not be surprised to learn that he's a relative of yours.

Strother as Stonehill and Darby as Ross share notes about Rooster J. Cogburn:

[Mattie returns later to buy a pony from Col. Stonehill]
Col. G. Stonehill: Do you entertain plans of ever leaving this city?
Mattie Ross: Yes, I'm off early tomorrow morning for the Indian nation. Marshal Rooster Cogburn and I are going after the murderer, Tom Chaney.
Col. G. Stonehill: Cogburn. How did you light on that greasy vagabond?
Mattie Ross: They say he has grit. I wanted a man with grit.
Col. G. Stonehill: Well, I suppose he has that. He's a notorious thumper. He's not a man I would care to share a bed with.
Mattie Ross: Nor would I.

The confrontations between Wayne and Darby make the film come alive.


Mattie's repartee with Rooster is very witty and combative. If Rooster were younger, it would be easier to call it flirting:

The heart of the story, though, is the ride to find the outlaws, and the various brushes with them along the way, and then the final shootout. The following dialogue sets up the climax:

Ned Pepper: What's your intention? Do you think one on four is a dogfall?
Rooster Cogburn: I mean to kill you in one minute, Ned. Or see you hanged in Fort Smith at Judge Parker's convenience. Which'll it be?
Ned Pepper: I call that bold talk for a one-eyed fat man.
Rooster Cogburn: Fill your hands, you son of a bitch!

Otherwise, Wayne just acts hammy to fill the time between confrontations. In fact, there is lot of quite humorous dialog if you get in the spirit of it:

In the end, all three in the team are essential for survival. Each one proves their own "grit" in their own way.

Rooster Cogburn: Damn that Texan - when you need him, he's dead.
LaBoeuf: I ain't dead yet, you bushwhacker. Hang on.


The scenery is marvelous. The story is entertaining and sentimental. The acting is perfect, and Wayne deserved his Oscar despite intense competition in a truly great year for movies. "True Grit" is a truly great film.


There was a remake. Nice effort, but just find the original and watch it again. Below is the trailer for "True Grit."