Jennifer Connelly went through a phase in the 1990s when nothing would stop her. A former child star, Jennifer Connelly was determined to do whatever it took to succeed as an actress, and her plan worked. Among the items on her list that she ticked off was acting nude and topless, which she did in (along with one or two other films) "The Hot Spot," "Inventing the Abbotts," "Career Opportunities" and this film, "Mulholland Falls" (1996), directed by Lee Tamahori from a script and story by Pete Dexter and Floyd Mutrux. Is it worth picking up this fairly pedestrian crime melodrama set in the early 1950s just to catch about 30 seconds of Jennifer Connelly doing her thing? Only you can say that. "Mulholland Falls" is, though, a good trip back into the 1950s, the conservative decade which is the usual setting (see "Mischief," for instance) for actresses looking to bare a little skin in the most innocent-seeming environment where that reasonably could happen.


In "Mulholland Falls," Detectives Maxwell Hoover (Nick Nolte), Ellery Coolidge (Chazz Palminteri), Hall (Michael Madsen) and Relyea (Chris Penn) work out of the Los Angeles Police Department. They are an unorthodox bunch, doing whatever it takes to achieve their ends. Their distinctive trait is to wear hats (which was common then) while beating up suspects. This, in fact, they do at the film's beginning, when they take a criminal (William L. Petersen of "CSI" fame) and try to convince him to leave town by throwing him off a cliff near Mulholland Drive (hence the title "Mulholland Falls," the suspects "fall" from Mulholland Drive down the hill to the road below).

An intriguing case arises when a dead young woman is found in a barren field, every bone in her body broken. She turns out to be aspiring actress Allison Pond (Jennifer Connelly). The coroner surmises that she fell off a cliff, though that is impossible given where she was found. The detectives later receive a film taken by a hidden camera of Allison having sex in a motel, which spurs them to investigate the case further.


Hot Jennifer Connelly character Allison's friend Jimmy Fields (Andrew McCarthy) tells the detectives that he made the film, but he is murdered before revealing anything else. An autopsy of the body reveals radioactive glass in Allison's foot, sending the detectives to the only place nearby with radioactivity - the Nevada Atomic Testing Site. They break in without authorization, but immediately are picked up by government troops led by Colonel Fitzgerald (Treat Williams).


The detectives find out that the man in the film with the hot Jennifer Connelly character Allison was the head of the nuclear weapons facility, retired General Thomas Timms (John Malkovich), who is very sick but heads the Atomic Energy Commission. Around this point, someone tries to blackmail Hoover to back off by delivering a tape of him also having sex with the hot Jennifer Connelly character Allison - showing that Hoover is not exactly what he seems, and that he knows much more than he's been saying.


The "Mulholland Falls" detectives keep investigating despite political pressure and uncover a secret government program to test the effects of radiation on men, most of whom are dying like Timms. Hoover and Coolidge fly back to LA with Fitzgerald and his aide (Kyle Chandler), at which point it all dawns on Hoover that this was how Fitzgerald disposed of the hot Jennifer Connelly character, by throwing her out of the same airplane, and that Fitzgerald plans to do the same to them. Everything comes down to a climactic gun battle aboard the cargo plane, with the losers facing certain death.


"Mulholland Falls" is a neo-noir crime thriller (like the contemporaneous Dark City, but set in the past, not the future) which gets the look and feel of 1950s LA down pat. The men smoke heavily, creating some striking visuals of smoke flowing out of them like chimneys, and the sexual repression of that decade is vividly illustrated by several plot points involving the hot Jennifer Connelly character. Simple shots of the detectives driving out to the nuclear testing range, or invading a restaurant to intimidate some thug, or any of numerous other small-change moments in this film stand out as things of beauty (yes, there is beauty in "Mulholland Falls" besides Jennifer Connelly), because you really get a sense of being there and witnessing something from the past. The attitudes are correct, and there is no cop-out ending or moral to be learned. Everybody is hard-bitten and out for themselves, and the dangers of the dawning nuclear age and runaway technology that nobody yet understands are hammered home repeatedly.


You could watch "Mulholland Falls" for the men's fashions and the period cars and the vintage aircraft, but you can see that in any number of other films. What you won't see in those films is the bodacious Jennifer Connelly honing her craft by simulating sex and doffing her duds. At this late date in "Mulholland Falls"' history, few viewers are going to be all that interested in the turgid melodrama of whether Hoover will be able to reconcile with his betrayed wife, or how much longer General Timms has to live because of his exposure to radiation. What is timeless, though, is Jennifer Connelly preening and doing all the things that a call girl of that era might do. The only really interesting drama in "Mulholland Falls" is what, exactly, the hot Jennifer Connelly character had in mind with all that taping of her trysts with Timms, Coolidge and whoever else hot Jennifer Connelly character Allison Pond was going to blackmail.


The acting in "Mulholland Falls" is solid if unspectacular. Jennifer Connelly is marvelously vampy, and Nick Nolte does a nice, stoic job with Hoover. Malkovich is appropriately creepy as the dying Timms (he gets off some thought-provoking lines about "the cornerstone of civilization" and such before he - like Jennifer Connelly - exits too soon).


Everybody else besides Jennifer Connelly and Nick Nolte sort of fades into the background except Treat Williams, who looks handsome in uniform but was not born to play a heavy. There are unbilled cameo appearances by Rob Lowe (probably an ironic commentary by the film-makers on his own sexual scandal of the '90s), Bruce Dern and (if you know when to look) Virginia Madsen to liven things up a bit.


Melanie Griffith appears as Hoover's betrayed wife, but makes absolutely no impact whatsoever despite having ample opportunity to have a fit about her husband's affair with the hot Jennifer Connelly character. The pace is slow and drags at times after the first half hour, i.e., once Jennifer Connelly has left the scene. 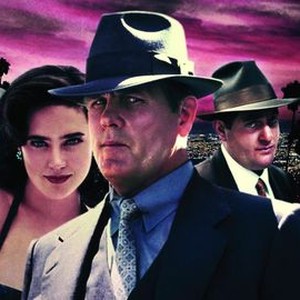