Guardians of the Galaxy, Hooked on a Feeling


"In the far reaches of outer space, an American pilot from the 1980s named Peter Quill teams up with a motley collection of outlaws and finds himself the object of a manhunt after stealing an orb coveted by the villainous Ronan the Accuser."


Walt Disney Studios bought Mavel for $4 billion a few years ago, and it is about to start getting some more of its money back.

"Guardians of the Galaxy," a live-action superhero film, was released on August 1, 2014. It turned into a massive hit that spawned a franchise, with the first sequel released in 2017.

"Guardians of the Galaxy" features the Guardians battling the insectoid aliens known as the Sakaaran. Ronan the Accuser also is featured.

Here is the official synopsis, which is a bit wordy:

An action-packed, epic space adventure, Marvel’s “Guardians of the Galaxy” expands the Marvel Cinematic Universe into the cosmos, where brash adventurer Peter Quill finds himself the object of an unrelenting bounty hunt after stealing a mysterious orb coveted by Ronan, a powerful villain with ambitions that threaten the entire universe. To evade the ever-persistent Ronan, Quill is forced into an uneasy truce with a quartet of disparate misfits–Rocket, a gun-toting raccoon; Groot, a tree-like humanoid; the deadly and enigmatic Gamora; and the revenge-driven Drax the Destroyer. But when Quill discovers the true power of the orb and the menace it poses to the cosmos, he must do his best to rally his ragtag rivals for a last, desperate stand–with the galaxy’s fate in the balance.

Couldn't they have just said "Earth guy on the run in Outer Space" like just about every other science fiction film?

Fans of the classic Marvel comic books may wonder why some of the more prominent characters, such as the Badoon, aren't featured. Well, to make a long story short, it is because of who owns the rights to what. It is useful to go through this just to clarify things.

Apparently, it goes like this. Disney owns Marvel, and Marvel owns the the rights to the Guardians. So far, so good. Disney/Marvel can make a movie about the Guardians.

However, Marvel does not retain the sole rights to everyone else in the Guardians universe. Rights to the Skrulls, for instance, are split between Marvel and others. Apparently, if the rights are split, that means whoever owns a piece can use those characters - at least usually.

Marvel/Disney does not retain the rights to "Fantastic Four" and "X-Men." Those rights were sold to Twenty-First Century Fox for them to make their motion pictures about them. A similar deal was made for rights to "Spider-Man," which now are owned by Sony. So, Marvel/Disney cannot make films about them or use those characters.

Why are Ronan the Accuser and the Sakaaran all right for Marvel/Disney to use? Because their rights were never sold off. Sometimes, it comes down to a fine-line judgment of with whom a particular character is most involved. Marvel retains rights to "The Avengers," so any character that interacts more with them than with "Fantastic Four" or "X-Men" or "Spider-Man" is all right for Marvel to use. However, even if a character interacts with "The Avengers," if he or she interacts more with "Spider-Man" or "X-Men," then Marvel may not use them - unless the rights are considered split.

Think of it this way: suppose Lex Luthor and Lois Lane somehow made a quick cameo in a single comic book of "The Avengers." That wouldn't give Marvel the rights to use them forever. The characters are intimately part of the Superman universe and their rights stay with whoever owns the rights to Superman (originally DC Comics, of course, though it's unclear who owns them right now).

So, since the Badoon are considered (by the lawyers) more a part of the "Fantastic Four" universe than "The Avengers," they can only be used in products created by (or licensed away from) Fox. You won't see them in "Guardians of the Galaxy," a Disney/Marvel product.

Anyway, in case you were wondering, that is how what you see on the screen is decided in Hollywood these days.

"Guardians of the Galaxy" stars Chris Pratt as Peter Quill / Star-Lord, Zoe Saldana as Gamora, Dave Bautista as Drax the Destroyer, Vin Diesel as Groot, Bradley Cooper as Rocket and Lee Pace as Ronan. It is directed by James Gunn, who also wrote the screenplay.

Oh, and to save you the trouble - here's that song from the trailer (you know you were going to look): 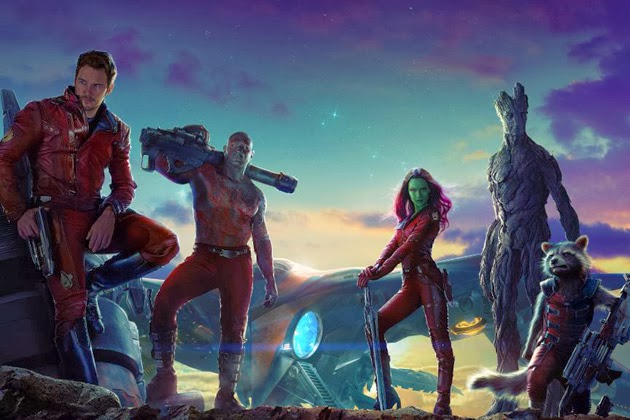