Ginger Rogers is remembered by casual movie fans as the first or second half of Fred Astaire's name - "A Fred Astaire/Ginger Rogers dance film" - and not so much on her own. Let's just get right out front of that and say that it is terrific for any actress who did her best work in the 1930s to be remembered at all. 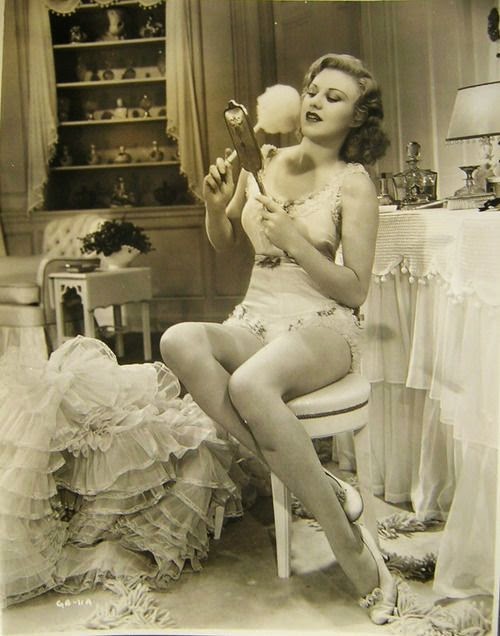 At this point, being associated with the great Fred Astaire - who, unlike just about anyone else in Hollywood, cornered the field on a specific field, film dance, and is acknowledged by everyone as the gold standard in that discipline - is something that shouldn't be taken as some kind of insult or pejorative. Ginger ran rings around Astaire as an actress and singer, but she was not the classic, creative dancer that Fred was. Ginger was an actress who danced and Fred was a dancer who acted and sang, and let's leave it at that. 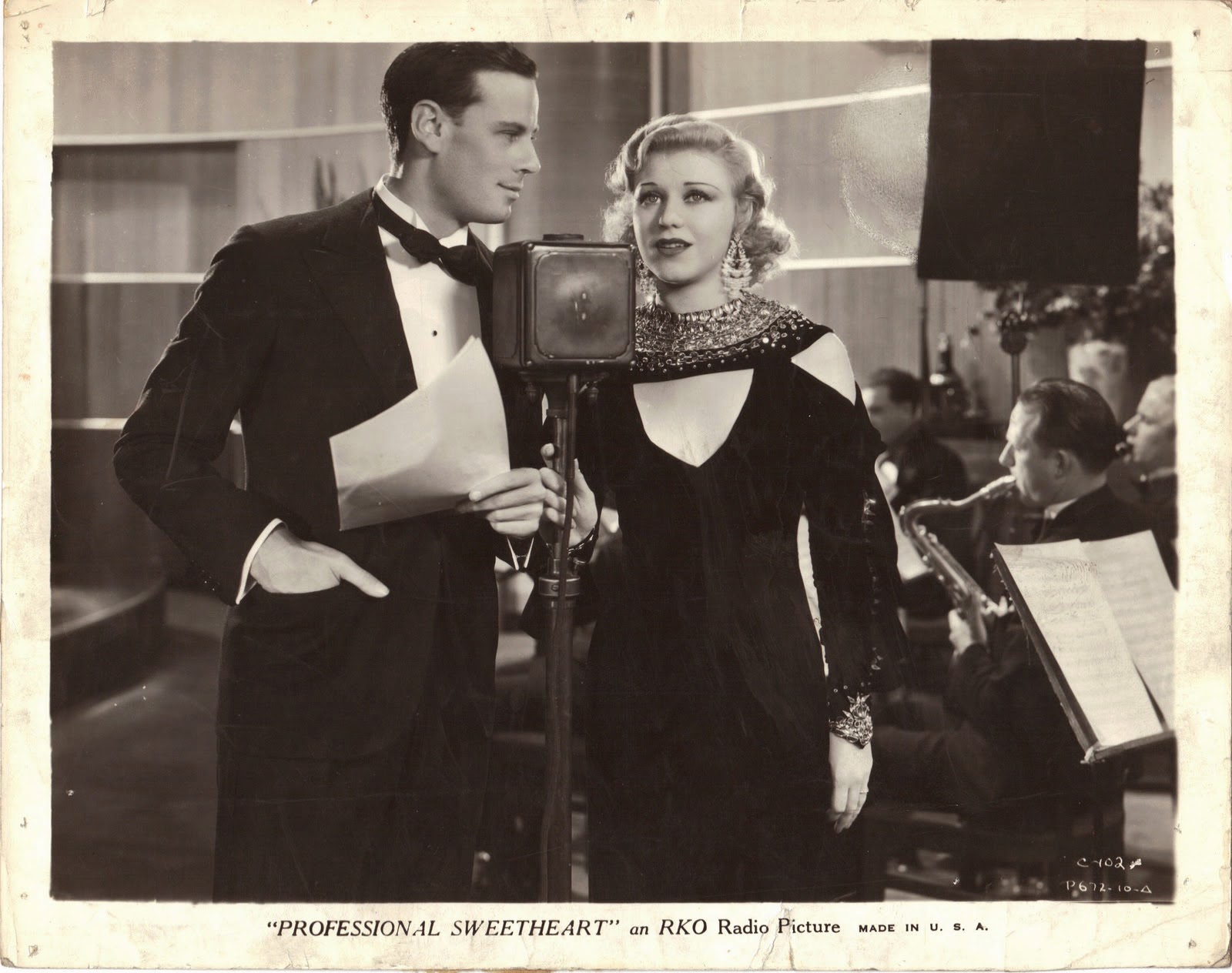 Thus, I'm not in the "Oh, poor Ginger" camp (which a somewhat disgruntled Ginger herself tried to stir up during her late years). However, there's not the shadow of a doubt that Ginger was a great talent in her own right, quite possibly the best actress of that decade. She won the Academy Award for Best Actress in 1941 - and that film is pretty much forgotten ("Kitty Foyle"). She worked sporadically into the early 1990s - but a lot of her later work was in "The Love Boat" types of situations. She sang the absolutely classic and eternal "We're in the Money" - and if you asked 1000 people what film that song was from, maybe one (if you got a particularly knowlegeable group) might know that Ginger sang it in "Gold Diggers of 1933" (and not "42nd Street" as even the knowledgeable fan might think). 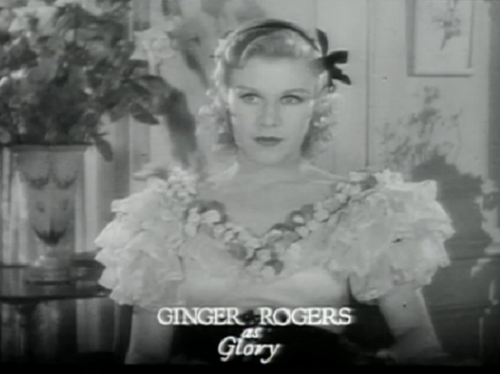 The point is simply that Ginger was one of those cases of a great talent who missed it by "that much," and whose fame now as merely being Astaire's dance partner is as much a source of irritation to her fans as it is a tribute. Delving into her work is rewarding because this girl had it going on throughout her career, and she was working it with the best of them. 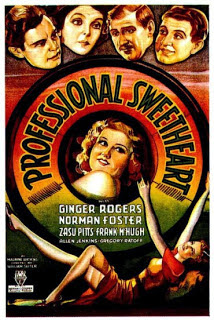 Case in point: "Professional Sweetheart" (1933), directed by William A. Seiter, written by Maurine Dallas Watkins and starring Ginger. The Hays Code was not quite in place yet, and films in the 1932-33 period such as the Clark Gable/Carole Lombard "No Man of Her Own" among many, many others were continuing to press the limits of sexual expression. Heck, the very title of this film - a synonym for "working girl" in its basest sense - wouldn't have made it past the censors. Ginger was the perfect vessel for this "last call" era of film partying, a pretty young thing who was willing and knew what she was doing. While films from that time may seem innocent now, they certainly weren't innocent then, and even today they retain a certain sauciness that resonates though the years.


The plot is simple: the celebrity front (Rogers as Glory Eden) for a typical boring household product ("Ippsie Wipsie Washcloths," which become a recurring joke of its own) must lead a pure and blameless life or it will reflect poorly on her sponsor's product or she faces disaster. She, though, is getting restless, dreams of "getting in trouble" for the first time, and is ready to fly the coop. Abetted by her knowing African-American maid (Theresa Harris), she tries to sample a little of what the world has to offer, is steered by her handlers toward someone "appropriate" (Norman Foster) who won't reflect poorly on the brand, and ultimately breaks free - or does she? It's a fun meditation on what Hollywood was (and is) really all about - selling soap or, in this case, Ippsie Wipsie Washcloths.


The film also stars a typical collection of character actors from the period who do their bits and fill in the time in between Ginger being (inexplicably) dubbed singing, prancing about in her underwear, and cracking wise: Gregor Ratoff, Zazu Pitts, Frank Pangborn, Edgar Kennedy, Frank McHugh. This is Ginger's film from start to finish, though, and, as her first foray into RKO after rising through the ranks at Warners, "Professional Sweetheart" ultimately, in a circuitous fashion, led to her pairing with Astaire. Before we gloss over the others too quickly, let's observe in passing that, contrary to current stereotype, "Professional Sweetheart" proves that old Hollywood a) was not averse to portraying obviously gay characters in an open fashion and without anything bad happening to them, and b) it also had no difficulty placing African-Americans into central and very positive positions (though here not crediting Theresa Harris for whatever reason when she should have been named as a lead - but she's up there on the screen and she got paid during the Depression and that, my friends, is not something to dismiss lightly). Also, Etta Moten, who dubbed in Ginger's singing voice here, was African-American. Hollywood definitely was open to employing African-Americans in prominent positions, and they got there solely through raw talent and a lot of hard work. Oh, and coincidentally or not, Etta also did some singing in "Gold Diggers of 1933," though Ginger got along on her own in that one.


This is not the best film of all time. It is not the best film of 1933. It is not even the most memorable Ginger Rogers film of 1933 (that honor goes to the aforementioned "Gold Diggers"). Everybody involved did more significant work elsewhere (Watkins wrote "Chicago," for goodness sakes). However, it is a delightful comedy showcasing Ginger in her skivvies that fans of the era's films might want to track down.

Below is a slice of "Professional Sweetheart" where Ginger acts like the bad girl her character wishes she had had a chance to be with her new, very innocent husband. Be forewarned, this scene is not for the faint of heart. This is actually a pretty realistic depiction of certain types of raw relationships, with Ginger taunting her man savagely and daring him to do something - and then, well, he does.