I am an old school Trekker, and am not overly impressed with "Star Trek: First Contact" (1996), directed by cast member Jonathan Frakes for Paramount. Now, the cast is mostly on record as saying that they enjoyed working on "Star Trek: First Contact" more than any other, but that is probably just because it was their first film without the original crew anywhere nearby.

"First Contact" isn't bad, and it certainly has its moments, but it sure doesn't blow off my socks, either. It doesn't compare with the films made by the original cast, and has too many similarities to the "Next Generation" series for me to take it seriously as something above and beyond. I think of it as simply an extended TV episode from the "Next Generation" series. That may be just what you want, in which case, why are you reading a review - go see it! However, if they are just aiming at people who want to see their old favorites doing the same old things in the same old ways, they should just go and do another tv show, or maybe a tv movie. Don't bore me with feature films that are simply blown-up tv episodes. I will admit that guest star James Cromwell gives a big league performance, better than any seen in the "Next Generation" series, but the regulars are just running through the motions. Their characters are so set in stone that they might as well pose together as Mount Rushmore. Take it for what it is and enjoy, just don't expect too much from this movie unless you are a big Data (Brent Spiner) or Captain Picard (Patrick Stewart) fan.

Viewers usually go into a film like this with strong convictions. Either you a fan of the numerous Star Trek TV series and the Starship Enterprise, or you aren't. Let me get right out front on this and say that my loyalties always have been with the original series, not the various remakes/sequels/prequels/etc. I would imagine that if you grew up with the pablum that was "Star Trek: The Next Generation," this film will prove a wholly satisfying experience, as it reunites all of those epic heroes while still in their prime. Here they all are, frozen as if in amber, doing their things exactly as they did on the long-running TV series.

So, with that huge fraction of the audience satisfied and out of the way, let's look at the film as a film for those wondering whether it's worth watching. "First Contact" is wildly uneven. There are some great scenes and a few fine characterizations, but there also is some seriously poor acting, too much emphasis on the "old gang" atmosphere, and a plot that, well, to say it is sketchy is probably an understatement. The score by Jerry Goldsmith isn't necessarily bad, but it is slow and ponderous and completely pompous. The original series had a fast, bright, lively theme that got your pulse racing, this one sounds ostentatious and overblown. As the franchise has progressed and become an institution, like McDonald's or something, the themes have gotten slower and slower and slower, with a basic melody that has calcified into a completely generic riff. By this point, the Star Trek theme is more likely to make you nod off than it is to get you ready for some phaser blasting and Borg-kicking.

The script is a combination of seen-it-all-before elements from "The Next Generation" and plot points ripped off and subtly altered from the original series. Evidently, they didn't think that the previous film, "Star Trek: Generations," provided enough of a link to the original series for fans, so they go back and co-opt one of that series' episodes. James Cromwell, though, who plays the character from that episode, is the film's saving grace. As the eccentric Dr. Zefram Cochrane, he dominates every scene in which he appears. He acts rings around everybody in the cast with the sole exception of Patrick Stewart. If you are at all a fan of any of the many incarnations of "Star Trek," it is worth watching this film to see how he breathes life into a minor character from the original series. Alice Krige also is appropriately creepy as a very odd nemesis for our heroes.

After that, the acting quality falls off sharply. All of the original cast members are given their little bits to satisfy the fans, but what plays fine in a season-long series tends to fall flat in a film. The writers struggled mightily to make familiar figures Worf (Michael Dorn), Dr. Crusher (Gates McFadden), Geordi (LeVar Burton), and Deanna Troi (Marina Sirtis) relevant, but once you get past the "Why, here is our old friend Worf, so nice to see you again" moments, they are quickly shunted aside and given precious little to do because there are only 111 minutes granted to actually tell a real story. Their every appearance becomes a major, pointless distraction. They may as well just look at the camera, wave, then go home. Every catch-phrase from the series is given its "moment:" we all are supposed to pause and genuflect as Captain Picard (Patrick Stewart) portentously mutters "Engage" or similar nonsense that means So Much to certain Trekkers.


At the very bottom of the acting heap is Alfre Woodard, in a truly embarrassing role as, well, somebody Cochrane likes. I mean, being the big guy's main squeeze gives her the cred to talk down to a starship captain, right? She somehow gets mixed up in the Enterprise's problems for no apparent reason at all. One of the most annoying characters in the whole "canon," she is given so many diva moments that they might as well have given her an aria to sing. I'm sure her hyperactive over-acting is not wholly her own fault and is a script issue (she tries to kill the Enterprise crew at first, then faints aggressively upon learning their identities, how precious). However, injecting her into scenes where she has no business shows how slack the writing was. They needed somebody to be an antagonist on a personal level to Picard (the Borg are so cold), and she manages that as self-righteously as the screenwriters could get away with. I believe she is a fine actress, but not in "Star Trek: First Contact."


There is a studied self-indulgence about this film that just reaches out and grabs you. We have Director Jonathan Frakes acting like a, well, director in virtually every scene in which he appears (who exactly is flying Cochrane's ship, him or Cochrane, since he's the one giving all the commands and smirking the whole time?). Frakes oozes into his scenes like Dean Martin after a few drinks. Fan favorite Commander Data has his every twitch focused upon and his part expanded way beyond its usefulness. Once you get past the fan favorites, everyone else just drifts through their scenes. There is a definite caste system at work here. We have the big stars like Cromwell actually trying to act, then on the next rung down the regulars sleepwalking through scenes exactly as they did ten years before, then the peons who don't get a chance to do even that. At the end we see some of Cochrane's fellow villagers standing around, and one might well ask, why didn't we ever spend any time with these people before this? The answer is clear, they aren't "part of the canon" so they don't merit any attention. Which pretty much summarizes the entire film. Cochrane's friends appear more like passers-by cordoned off by the crew during filming than people he lives and interacts with on a daily basis.


If you aren't a fan, you might still enjoy "First Contact." It has some great battle scenes and a wonderful take on how human our heroes invariably are or were. But this one's really for the completists, the hard-core Trekkers who don't mind plot anomalies and who work overtime to come up with explanations for things such as why a Vulcan survey ship would notice a primitive rocket flying briefly through the Earth's atmosphere but not the major starship floating nearby, or why certain "assimilated" enemies are supposed to be biological and susceptible to poison gas but somehow can work out in space without suits.


An enjoyable romp for fans, just an OK time waster for everyone else. 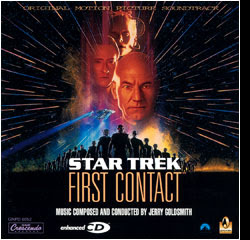